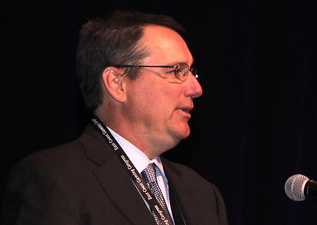 Barring any delay, Eldorado Resorts CEO Tom Reeg (l.) foresees closing the company’s merger with Caesars Entertainment by the end of June. When that happens, Reeg will be the CEO of the new company with 60 casinos.

Eldorado Resorts CEO Tom Reeg anticipates completing the $17.3 billion merger with Caesars Entertainment by the end of June or possibly July if one of the state regulatory agencies doesn’t put the transaction on its agenda.

When the merger was interrupted by the Covid-19 pandemic in mid-March Reeg told an analyst conference call that he considered calling off the merger, which was first announced almost a year ago. But just as quickly he dismissed it.

The main reason is that the financing that was in place before the pandemic is still there. “It’s very clear to us the best option is to continue and close the Caesars transaction,” He said. “It wasn’t a difficult decision. Everything we liked about the deal still holds up, and we’re looking forward to closing the transaction and getting underway.”

Once Eldorado completes the acquisition, Reeg will be the CEO of the combined company with 60 properties, which would be the largest gaming company in the U.S.

Eldorado’s first quarter revenues were hammered by the coronavirus, which led to closing 23 casinos on March 18. Revenues fell 17.5 percent, a loss of $175.6 million. The company began with a strong first two months, up 24.7 percent, before the disaster hit.

The company furloughed nine tenths of its workforce, reduced executive salaries and slashed other costs. It has $670 million in hand, of which it is spending $.1 7 million a day to keep its properties ready to renew business, which it will begin in Louisiana, and continue until June.

One of the last impediments to the merger was lifted when Eldorado agreed to sell properties in Louisiana and Nevada to Twin River Worldwide Holdings (TRWH) for $155 million. That was to avoid federal antitrust action.

Eldorado has made another antitrust-related deal to sell the Isle of Capri Kansas City in Missouri and Lady Luck Vicksburg, Mississippi to TRWH for a total of $230 million.