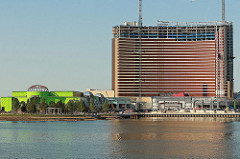 Officials of Wynn Resorts last week told the Massachusetts Gaming Commission that the Encore Boston Harbor is 60 percent finished and that $1 billion of the projected $2.5 billion has been spent so far. The casino has a scheduled opening of June 2019.

The roadwork in Boston that the casino company has helped fund is expected to be completed in the coming months. The purpose is to improve what is already a heavily congested traffic situation in the city across the Mystic River from the Everett casino.

The Wynn casino in Everett is under its own legal assault. This time by the jilted suitor that didn’t get the license for the Boston metro gaming zone (Region A) in 2014: the Mohegan tribe. The tribe was already enmeshed in a lawsuit against the MGC challenging that decision. However, the scandal involving the founder of Wynn Resorts, Steve Wynn, and multiple sexual allegations in a “Me Too” induced corporate nightmare that forced him to resign as CEO and divest himself of his shares of stock, has given the tribe new hope.

In a new filing to the state court the Mohegans, who operate the Mohegan Sun in neighboring Connecticut, argue “The gaming commission’s failure to uncover the allegations of Steve Wynn’s reprehensible conduct and the lack of corporate controls in its initial investigation of Wynn Resorts is another example of the bias and flaws in the commission’s approach to the Region A licensing decision.”

At the MGM Springfield not only casino employees are in training for the planned August 24 opening, so are law enforcement officials of the Massachusetts Gaming Commission who will be overseeing the honesty of the games and dealers.

The MGC’s eyes and ears are known as “gaming agents.” Agent Holly Cantell, a supervising agent, told the Republican that they keep a close watch for small infractions, which can add up. “If a person’s not greedy, and they can get away with one chip a day, they will do it for the rest of their entire career. That’s why we keep track of them.”

Gaming agents ensure that chips don’t leave the roulette table or the craps table unless they are supposed to.

Massachusetts is a new gaming state, so its regulations are informed by the experience of other states that have operated casinos for decades. One such regulation is that players are not able to put their cellphones on the gaming table just in case they might be used to try to electronically influence a game.

These officers have been operating at the state’s first casino, the slots parlor Plainridge Park Casino, for three years now. That casino has 1,200 slots, MGM Springfield will have 3,000, plus 100 tables, a poker room and a VIP gaming area.

Cantell, who is overseeing the training of the agents, has been involved in the gaming industry since 1981, when she got her start at the Golden Nugget in Atlantic City. She has an intimate knowledge of roulette and blackjack, acquired from years as a dealer and pit manager. On the day the Republican watched several hours of training, those were the games the officers and agents were being trained in, along with baccarat, and other carnival games like four-card poke.

They are also being trained in spotting cheats by one of the legendary cheats, Sal Piacente, “The Hitman.”

Besides looking out for crooks, the agents will also listen to complaints from customers claiming the machines don’t pay out correctly. They will also work with local police officers, some of whom are also getting training at the casino. State police will monitor the surveillance cameras.

Good math skills are a plus for a gaming agent, but software engineers are also welcome. There will be from two to three gaming agents on every shift, 24/7.

Bruce Band, who heads of the MGC’s gaming agents, came out of retirement from years working in Atlantic City to take the job. He told the Republican, “Every day you come in, you find the unexpected, and that’s what makes this fun.” He added, “And it’s that way for my gaming agents, my supervisors. You have a cheating scam, you have to watch the film, and try to figure out what this person was doing. And it takes a lot of work, detective work so to speak.”

Agents may learn of a gang of cheaters traveling the globe, hitting different casinos. “You’ll get information they’re in South Africa, then Singapore, and before you know it you’re hearing they’re in California card rooms, and you know eventually know you’re going to see them,” said Band.

Gaming agents and law officers need an intimate knowledge of how the games work and the procedures, which could be something as subtle as a dealer using the wrong hand to pull a card. Fortunately, every action is recorded, 24/7, and the video is kept for 30 days.

One thing that Massachusetts has learned from others’ experience is the importance of all of the agents and police working out of the same office. That includes employees of the Alcohol Beverages Control Commission.

Band notes that there’s a lot of information to be learned from someone’s ID.

“They teach us how to inspect IDs,” he said. “And I didn’t know all these licenses had so many things on them. Simple things, like Maine, in the middle of the moose head, there’s a happy face. And that’s one of the counterfeitings you look out for.”

A Springfield police office with three decades on the force, and who thought he was pretty knowledgeable about blackjack, discovered: “I didn’t really know much about it at all, just the little small things that you don’t know that go on in a casino, that you have to learn to play the game.”

Governor Charlie Baker, who recently toured the casino site, predicted last week that patrons will be impressed when they see it. “This thing is going to be spectacular. … There’s so many items and elements to this thing that are specifically geared toward reminding people this is in Springfield and it’s a big part of Springfield’s history. I think people are going to be blown away by it.” He added, “I can’t wait for it to open and I can’t wait to see what happens next. These folks have been top drawer in everything they’ve done and everything they’ve said they would do right from the beginning, and I’m really looking forward to seeing them put this whole plan into action.”

The casino resort will include a five-story boutique hotel, 125,000 square feet of gaming, a plaza, retails shops and several restaurants.

The governor’s tour included the lobby that includes whimsical elements that led a reviewer to compare them to Dr. Seuss and to note: “A staircase to nowhere. A wall of oversized book spines. A chandelier of vintage hats.” It must be noted that said hat chandelier is in the presidential suite and isn’t a standard feature in most rooms. The Seuss reference is intentional since the good doctor and author of children’s books was a Springfield native. The oversized book spines celebrate Emily Dickinson, among others, who lived in nearby Amherst.

Because the casino incorporates some architectural elements, and even parts of some historical buildings that were salvaged, it’s something of a mashup of various period styles and incorporating both the city’s literary and industrial past.

According to Michael Mathis, president of MGM Springfield, “MGM Springfield will fit seamlessly into the historic character of Downtown Springfield, while creating a landmark destination for entertainment and excitement.” He added, “Our design celebrates what is authentic while spotlighting the iconographs of the region’s past in creative ways.”

The city’s publishing past will be celebrated by a vintage printing press in the lobby. Since Springfield is said to be the birthplace of baseball, there will be a wall of trophies to that sport.

The casino is in the midst of the part of Springfield that was hit hardest by the freak tornado of 2011 that gutted that part of the city.

That recent disaster had a great deal to do with MGM’s bid to build there, according to MGM CEO Jim Murren, who recently told the Worcester Telegram that as soon as he saw the damage that he wanted to do something to assist in the recover.

Several months before he proposed the casino to the city Murren met with a Springfield businessman, Paul Picknelly in an office overlooking some of the damaged neighborhood. “I admit, I lost all interest in Boston at that point,” he said. “And I thought I better see whether I can help this city.”

Murren spoke at the Worcester Regional Chamber of Commerce’s Breakfast Club. He told the club that the casino will employ 3,000, of who 2,000 have already been offered positions. It will pay $25 million annually to the city and spend $60 million with local merchants.

He said, “I like being able to go into a community and make a difference. Boston’s doing great. I want to help Western Massachusetts.”

He also likes opening up his company to diversity. He said he left Wall Street, where he was an equity analyst because of the “boys club,” mindset, only to find that it was even more a part of Las Vegas. “And I find that very disturbing,” he said.

He became the gaming giant’s chief executive officer ten years ago and has made diversity a major goal. He points to the fact that MGM’s board of directors now includes four women.

He noted that since the Supreme Court’s lifting of the ban on sports betting that his company is moving to prepare for that at whatever states legalize it. He does not, however, expect sports betting to become legal in the Bay State.

He spoke of his philosophy about resorts. “I don’t believe an integrated resort is one where everything you need and want to do is within the boundaries of the resort. I think it should be a home base that supports small businesses and supports non-casino development and entertainment,” he said.