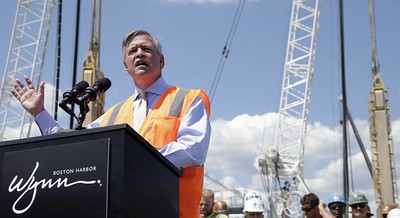 His replacement will be Brian Gullbrants, who is stepping up from leading hotel food and beverage operations. No reason was given for DeSalvio’s departure.

Gullbrants, his replacement, led the 2008 opening of the hotel at Encore Las Vegas. He has been in charge of opening the hotels at Wynn Las Vegas and Encore hotels since 2011. He came to Wynn following two decades at the Ritz-Carlton Hotel Company, where he was vice president of operations.

Wynn Resorts CEO Matt Maddox praised DeSalvio’s ability “to both manage a complicated construction process while listening to the needs of key stakeholders was essential to our success.”

DeSalvio led the casino’s construction. He provided a steady hand during the traumatic suitability hearings with the Massachusetts Gaming Commission that followed the rapid resignation and flushing down the corporate memory hole of founder Steve Wynn for alleged sexual misconduct over the decades, including a $7.5 million payoff of one of his accusers. He was also there when the company briefly flirted with selling the Encore Boston Harbor to rival Bay state casino operator MGM Resorts International. He opened the casino on June 21.

Since opening, the Boston-area casino has earned almost universal plaudits. Forbes named it one of the best casino hotels and resorts in its 2019 Travel Guide.

Before joining Wynn, DeSalvio was president of Sands Casino Resort in Bethlehem.

More shuffling was announced at the property: Jenny Holaday has been hired as executive vice president of operations and Eric Kraus will be senior vice president of communications and public affairs. Holaday formerly worked as a senior marketing vice president at Caesars Atlantic City. Kraus is a Boston native and former executive with the Gillette Company.

Since Encore Boston Harbor’s opening it’s recorded “strong” table game revenues and “soft” slot revenues, according to a report that DeSalvio made to the MGC in September. Slots revenue concerns the company, DeSalvio told the commission last month. He said Wynn was exploring ways to up those revenues.

He said in September, “We’re actually adding a few more tables on the casino floor as we speak, but I will tell you the slots business has been soft.”

Encore earned $48.9 million in total gaming revenue in September, three months after opening its doors. Of that, $27 million came from gaming tables and $21.8 million from slots. That is compared to $52 million for August.

Encore’s rival, MGM Springfield, earned $19.8 million total in September, with Plainridge Park Casino following up in the rear with $11.5 million.

The revenue reports given to the MGC do not include profits from restaurants, hotels and other amenities when applicable. So far Wynn Resorts has not shared full earnings reports on the Boston-area casino, although in a second quarter earnings call it indicated that the Encore made $2 million daily the first eight days.

Cash In On Poker wit