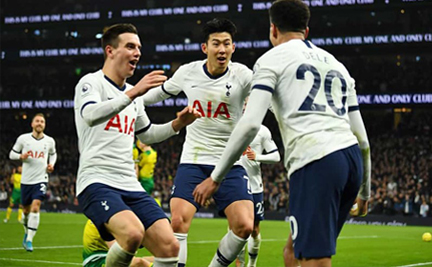 In this young 2020-21 English Premier League season, let’s take a look at which teams started hot, which have disappointed, and the direction they’re all headed in moving forward

We’ve seen plenty of surprises so far in the 2020-21 English Premier League season—and that’s good news, because last season went down as one of the most anti-climactic finishes in league history. Liverpool F.C. had the title locked up about halfway through the season, and maintained a huge gulf between itself and assorted second place-holders all year long.

The general hope is that this year’s title race is more exciting and tighter. Let’s dive into the biggest surprises and disappointments so far.

The Tottenham Hotspur are currently in tremendous form, winners of five straight in the EPL. The most recent of these five was a 2-0 victory over Manchester City in which they looked like the better side from start to finish. Unfortunately, we might be witnessing a team hitting its peak way too early in the season. Tottenham, while always a very strong team, just doesn’t seem to have the talent to stay on pace with Liverpool and some of the other top EPL powerhouses. Expect a finish anywhere between fifth and 10th for Tottenham.

Stock Advice: Hold on to some, sell some high

Southampton is another team in fantastic form right now, having earned a result in their last seven league fixtures. They were able to top the table for a brief period of time early on, and now find themselves in fifth, just three points shy of Tottenham and Liverpool for the league lead. Even more so than with Tottenham, this seems way too good of a run to be true. This group is most likely poised for a middle-of-the-table finish.

The Wolverhampton Wanderers have been consistent this season in one regard. They’re getting results in games within their limitations. But the lack of high-end talent to beat top-tier teams is just too much of an obstacle for this team to make any real noise this season. While they may not fall too far below where they currently stand on the league table, they definitely won’t rise up any, if at all.

Boost your personalized parlays! Build any 3+ Leg Parlay and boost the final price yourself at PointsBet.com. Any market that can be parlayed is eligible to have a parlay booster applied.

Manchester City is a very young side with plenty of talent to go around at every position. They’re perennial contenders for the league title and figured to be the same position this season. So what’s gone wrong for Man City so far? A lack of a clutch gene has hindered the squad. They’ve only dropped two matches, but are also tied for the league lead in draws with three (in eight matches), which would all look much better instead in the win column. This team shouldn’t have a problem turning this around, as they look to be active in the transfer market and again, still possess tons of young talent.

Arsenal is another team with young talent that seems to lack the necessary leadership to earn results on a consistent basis. That’s been this side’s biggest problem through nine matches: consistency. It seems the Arsenal has spent most of the season alternating wins and losses every other game, and this sort of inconsistency will lead to a middle-of-the-pack finish, not at the top, like the team would hope for. While Arsenal’s floor remains decently high, their ceiling is unclear and for now it seems lower than expectations.

Manchester’s other big-name squad has experienced similar levels of disappointment, although their path has more closely resembled that of Arsenal. Inconsistency has also been an issue for Manchester United, as their four wins and three losses (just one draw) raise somewhat of a question mark. Again, this bunch also has lots of young, high-end talent with potential to turn their season around at the drop of a hat. While there haven’t been any indications yet as to when that theoretical hat will indeed drop, it also doesn’t seem very likely that Man U falls any further below their current spot on the EPL table. Hold out hope for this group.

With all these surprises, many teams also are playing to expectation this season. Liverpool is back tied for the Premier League lead already after running away with the title last season. Chelsea and Leicester City continue to play well on a consistent basis. And most of the usual suspects in the cellar of the table find themselves right back at the spot in which they are accustomed. Enjoy what should be a much more exciting EPL season and familiarize yourself with the “Double Chance” option! You’ll thank me later.

Get a $100 Risk Free Bet at GoldenNuggetCasino.com. Bet up to $100 on your first single sports bet. Only straight wagers (single bets) and live bets (in-play bets) qualify. Parlays do not qualify for this offer.

Hop Aboard for New O