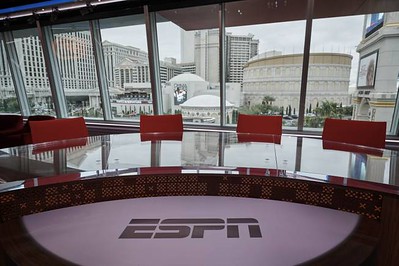 ESPN has planted its flag in Las Vegas in partnership with Caesars Entertainment. Their joint effort is a 6,000-square-foot multimedia studio (L.) at the Linq, which ESPN describes as the “epicenter” of its increasing investment in betting-themed programing.

Caesars Entertainment has teamed with sports media giant ESPN to open a studio complex on the Las Vegas Strip for the production of an array of betting-themed programming.

A joint statement described the 6,000-square-foot facility at The Linq Hotel as the “epicenter of ESPN’s sports betting-themed content for linear, digital and social shows,” one that will play “a vital role during major sporting events, including the growing number of franchises and marquee events in Las Vegas.”

The complex houses three studios and features 12 cameras, including two exterior robotic cameras, and has the capacity to transmit and receive information to and from ESPN control rooms and technical operations around the country.

This project is an outgrowth of an expansion of the network’s sports betting-themed content onto multiple platforms that includes the launch of a new digital show coming to the ESPN app, Facebook, Twitter and YouTube.

The studio also will permanently host the network’s popular “Daily Wager” show, which is returning September 8 from a pandemic-related hiatus.

“In our ongoing mission to serve sports fans, we are committing to a bigger presence both in Las Vegas and with our content across platforms to authentically serve a fast-growing, highly engaged audience,” said Mike Morrison, the network’s vice president of business development.

Chris Holdren, co-president of Caesars Sports, said he views the collaboration a “testament both to Las Vegas’ position as the sports betting capital of the world and its transformation into a sports city.”

“With the marquee location of the studio right at the heart of the Strip, we’re excited to see the unique programming that could only be produced here in Las Vegas,” he said.