ESports Being Pushed in Atlantic City 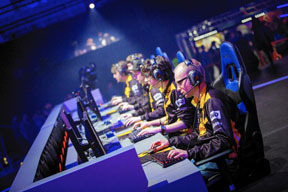 Lauren Moore, head of the economic development agency the Atlantic County Economic Alliance said that in its pursuit of new industries for the county, the group is focusing on attracting eSports facilities to Atlantic City.

“The area of esports came to our attention and, ever since, we’ve been looking at this deeper and deeper,” Moore told ROI-NJ.com. “Atlantic City’s 24/7 economy, the abundance of hotel rooms, the power, the connectivity and the other activities available for the millennial demographic all seemed to be a fit. Atlantic City’s attributes lend itself to this new industry.”

The city recently attracted Continent 8 Technologies, a global network solutions provider headquartered in the United Kingdom, to Atlantic City which is building two tech centers in the resort. Moore said the alliance is working with tech firms to help establish the city as a home for eSports.

“We’re now working very closely with Meet AC, which focuses on meetings and conventions, to start to develop the venues for hosting esports events,” she said. “You’ve seen these venues popping up in Las Vegas or other places recently. Here, there have already been some events that have just been overwhelming successes.

“That’s exciting our appetite,” she said. “We’re hoping to take this to the next level. It’s absolutely coming; and it’s going to be huge here. We’re also looking at the support industries that come with esports — the software writers and hardware suppliers, the high-tech jobs connected to esports. We want to support getting them here, too.”