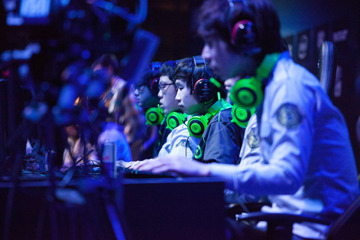 What Is eSports?
eSports, also known as electronic sports, is a form of competition that is facilitated by electronic systems, most commonly video games. eSports resembles organized, multiplayer video game competitions, particularly between professional players. Tournaments provide live broadcasts of the competition, prize money, and salaries to the professional competitors.

Here’s an overview of some of eSports’ most popular games.

League of Legends
League of Legends is a fast-paced, competitive online game that blends the speed and intensity of an RTS (Real-Time Strategy) with RPG (Role-Playing Game) elements. Two teams of powerful champions, each with a unique design and play style, battle head-to-head across multiple battlefields and game modes, the most popular is five versus five on Summoner’s Rift.

Summoner’s Rift is mirrored diagonally and features three lanes into the enemy base. Each lane—bot, mid and top—is defended by three turrets and an inhibitor, while the nexus is protected by two turrets. Both sides of the map have expansive jungles containing powerful buffs and the central river that is home to two boss monsters, Baron Nashor and one of the four elemental dragons. Push your way into the opposing base, destroy the enemy nexus and win the game.

Dota 2 (Defense of the Ancients)
Dota 2 is similar to League of Legends in how to win and the map. However, it is very different in the ways of jungle monsters gameplay and heroes, or champions, as they’re called in League of Legends. It’s still a five-versus-five game with the three lanes leading into the enemy base protected by turrets. While watching the two games being played, you may think they are practically the same, but playing one definitely feels different from the other.

Street Fighter
The player competes in a series of one-on-one matches against a series of computer-controlled opponents or in a single match against another player. Each match consists of three rounds in which the player must knock out an opponent in less than 30 seconds. If a match ends before a fighter is knocked out, then the fighter with more energy left will be declared the round’s winner. The player must win two rounds in order to defeat the opponent and proceed to the next battle.

Skins
In video games, skins, or skin gambling, is the use of virtual goods. Often, it refers to cosmetic elements. For example, in League of Legends, skins can be purchased to change the look of the champions you use. Many players buy skins for their favorite champions. In Call of Duty, skins let players customize their guns, instead of players. Skins have no direct influence on the game. They are used for players to look cooler and intimidate their opponent.