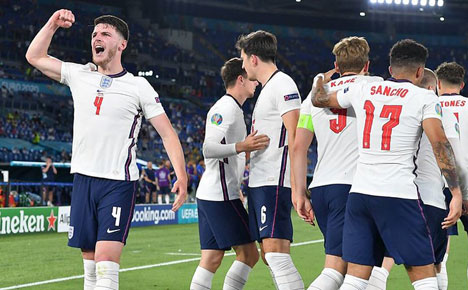 Oddsmakers have England to win Sunday’s Euro 2020 final. If they’re right, it will end the drought England’s been in for 55 years. Here’s the analysis and the latest odds.

Yes, there’s an Italian team in Sunday’s European Championships finals, bringing a 33-game unbeaten streak into Wembley Stadium. The Azzuri are deep, in-form, incredibly well-coached and dangerous from the goalkeeper out. This is a pretty good recipe for going nearly three years without losing a game.

And yet, given what happened Wednesday at the London arena, Italy’s an afterthought, an appetizer to the main course of a football-mad nation seeking its first victory in nearly three generations.

England punched its ticket to the European Championship finale Wednesday, finally putting a stake in a gutty Denmark team, 2-1. That earned the English a Sunday date with Italy. England seeks its first major tournament victory since the Three Lions disposed of Germany in the 1966 World Cup final.

And wave after wave of English legends came home minus hardware.

Betting Lines Are with England

Opening betting lines are staying home with England. The Three Lions opened as slight favorites for Sunday’s final, anywhere from minus-120 to minus-145 to win. Italy, despite playing probably the most impressive football of any team in the tournament, opens anywhere from -110 to +112 to win its first European Championship since 1968. 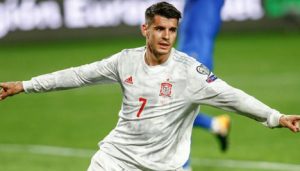 On Tuesday, Italy paid its Mediterranean neighbors back, putting a talented but undisciplined Spanish team to bed in a penalty-kick shootout, 4-2. Tied 1-1 after regulation and extra time, Italy missed its first spot kick, then drilled the next four. Enigmatic Spanish striker Alvaro Morata (l.) tallied his country’s only goal in the 80th minute to send it to extra time. Then he ended the shootout with a poor effort that Italian goaltender Gianluigi Donnarumma blew up.

That became a non-story everywhere but Spain and Italy on Wednesday. First, England was back home after a one-game sojourn to Rome, where the Three Lions disposed of Ukraine, 4-0 in the quarterfinals. And second, waiting for them at home was a Denmark team that was every neutral’s favorite.

The story read like a Hollywood script. The Danes were playing with house money after losing their first two group-stage games. They were playing without talismanic captain Christian Eriksen, who suffered a cardiac arrest in the tournament opener. Then they had the audacity to take a 1-0 lead on Mikkel Damsgaard’s spectacular free kick, putting Wembley into shock.

Damsgaard’s 30-yard laser, the first one of the tournament coming off a direct free kick, was the first ball England keeper Jordan Pickford fished out of his own net in the entire tournament. It ended an England-record 726 minutes of scoreless football.

Get a 20% Parlay Profit Boost for any 3+ leg parlay every Wednesday and Saturday at PlaySugarHouse.com!

Raheem Sterling, who has three of England’s 10 goals this tournament, applied the defibrillator. His run distracted Denmark defender Simon Kjaer long enough for Bukayo Saka’s cross to bounce off his leg and into his own net.

This ended Denmark’s growing wave of momentum. But what essentially finished off the Danes came in the 104th minute. Sterling broke into the left side of the 6-yard box and split two Danish defenders. One appeared to trip him, the other seemed to push him. Dutch referee Danny Makkelie immediately pointed to the spot, awarding a penalty kick. VAR reviews confirmed the penalty, which seemed to be less and less obvious with every replay viewing.

Kane’s 10th goal for England tied him with Gary Lineker for most international goals by an English player. With four goals, he’s one behind Portugal’s Cristiano Ronaldo and Austria’s Patrick Schick for the tournament’s “Golden Boot,” which is awarded to the tournament’s top goal scorer. Kane is plus-600 to claim the Golden Boot.

But more importantly, it finished off the Danes, who seemed deflated and emotionally spent for the duration.

Get a Euro 2020 Same Game Boost at Unibet.com. Build your bet (min. of two bet selections) and automatically get a 35% boost token. 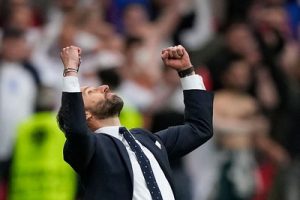 But England celebrated. Tweets from English celebrities—not to mention royalty—flooded Twitter. Everyone from former English captain David Beckham to Sarah, Duchess of York chimed in on social media. Beckham was at Wembley. Prince William was at Wembley. British Prime Minister Boris Johnson was at Wembley.

And two football-mad nations will be glued to Wembley Sunday for the third Euro game between the two. Italy claimed both previous editions: a 1-0 victory in the 1980 group stage and a penalty shootout victory in the 2012 quarterfinals.

At the same time, much of English football over the last 55 years just came full circle. England coach Gareth Southgate took over the Three Lions in 2016 after a lackluster career as a manager and an infamous moment as a player. It was Southgate who missed the decisive penalty kick in the 1996 European semifinals against blood rival Germany.

Up until he seized the reins and overhauled an England program stuck in a cursed neutral gear, Southgate’s managerial career was most noteworthy for getting Middlesbrough relegated from the Premier League in 2009. That ended the club’s 11-year stint in England’s top flight.

Now Southgate is the toast of England, having led the Three Lions to the 2018 World Cup semifinals and to their first major tournament final since World Cup winner Alf Ramsey four years before Southgate was born.

The oddsmakers think history will be made.

Watch Euro 2020 live on ABC, ESPN and FuboTV. Here’s the quarterfinals schedule for Friday and Saturday, July 9 and 10, complete with FIFA rankings:

Rahm the Favorite in