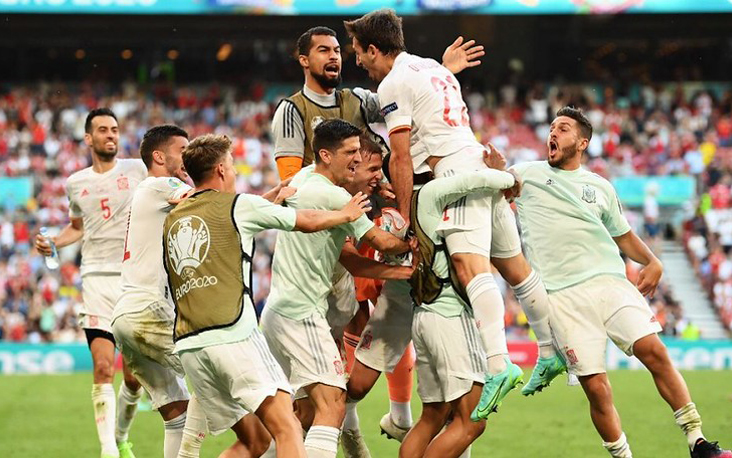 The favorites, including Germany, France and Portugal, were eliminated in the Euro 2020 Round of 16. Eight survivors now move on to the quarterfinals in one of the world’s most exciting tournaments.

All four powers exited in the Round of 16, which ended Tuesday. The eight survivors now move on to Friday and Saturday’s quarterfinals, in one of the world’s best football tournaments (soccer to you Yankees).

If the Round of 16 was any indication, this rollercoaster is just getting started.

It’s only fitting these two face off, considering the insane games they played to get here. Switzerland knocked out the defending World Cup champion French, so the Swiss took the crazier, more improbable path.

Knocking out France required Switzerland to:

Oh, but Spain—in a hold-my-beer moment—played probably the craziest game of the tournament. Its instant-classic 5-3 victory over Croatia featured these escapades:

Whew. So what do they do for an encore? Spain became the first team in European Championship history to score five goals in successive games. So if its flip-the-switch offense is on, there’s not much Switzerland can do about it. But the Swiss are brimming with confidence after scoring twice against the world’s best team and burying all five penalties in the shootout.

Both of these teams are capable of epic meltdowns, so this one probably comes down to who survives its inevitable blunder. The oddsmakers think that’ll be Spain, making it a +300 second-favorite. Switzerland is +2,500, the third longest shot on the board.

Get insurance for penalty shootouts at WilliamHill.com! Bet on the 90-minute money line of UEFA Euro Games through July 11. If your team wins on penalty kicks, get a free bet up to $50! 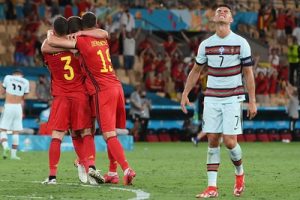 You could be forgiven for thinking the winner of this match has the inside track to the Euro 2020 title. Belgium is world’s No. 1 ranked team, according to FIFA. And Italy is the hottest team in the world at the moment.

Something’s gotta give here. Will it be the Belgian offense, which came through via Thorgan “The Other” Hazard’s scintillating goal late in the first half to finish off reigning European champion Portugal, 1-0?

The two Belgian stars are questionable after sustaining injuries: De Bruyne (ankle) and Eden Hazard (hamstring) exited in the second half of that Round of 16 victory over Portugal. Manager Roberto Martinez told reporters at a news conference their chances of playing “were 50-50.”

This explains why the Belgians are a value-loaded +700 to hoist the trophy next week.

If the Belgian offense clicks, will the Italians’ heretofore fortress-like defense finally break? After going 19 hours without giving up a goal—an international-record 1,168 minutes—the Azzuri finally yielded. That came via Austria’s Sasa Kalajdzic’s header in the 114th minute of Italy’s 2-1 Round of 16 victory.

Italy rides that defense, a record-31-game unbeaten string and a 12-game winning streak into Friday’s quarterfinal. If that defense wasn’t enough, the Azzuri are getting goals from a variety of sources. Substitutes Federico Chiesa and Matteo Pessina scored against Austria, the fifth and sixth different players finding the scoresheet in the tournament.

Putting away the pesky Austrians is one thing. Beating the Belgians is another. Yet, the oddsmakers like their chances more than the Belgians. At +400, the Italians are the third-favorites to win the European Championship.

Get One-Game Parlay Insurance at BetMGM.com. Place a parlay with four legs or more on a Euro 2020 match. If only one of those legs misses, you’ll get your stake back, up to $25. 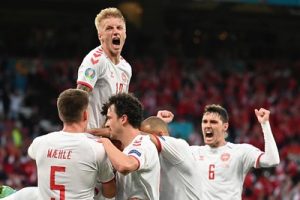 These two are also playing with house money, but the Danes have the bigger bank account. Given what Denmark has been through to this point, pity the Czechs for drawing the short straw and playing the team Nobody Wants To Play Now.

Denmark survived the frightening cardiac arrest of its best player, midfielder Christian Eriksen, then needed to beat Russia by at least two goals to reach the knockout round. That 4-1 win vaulted the Danes into an easy 4-0 dismantling of Wales in the Round of 16.

This latest form along with Eriksen’s story make the Danes an irresistible, cuddly team to root for if you don’t have a dog in the fight. Denmark won this tournament in 1992 and there’s a feeling of destiny here thicker than a Hamlet soliloquy. That Denmark team was led by goalkeeper Peter Schmeichel and this team by his goalkeeper son, Kasper. “To be” seems to have the edge over “Or not to be” with this team that the bookmakers put +1,000 odds on to repeat 1992.

That said, the Czechs aren’t going away easily, despite being +2,500 underdogs. Ask a now-sitting-at-home Netherlands team, who were ushered to the door by one of the biggest upsets of the tournament. Of course, the Netherlands and their oft-cynical style have only themselves to blame, after an unseemly handball by Matthijs de Ligt earned him a red card.

That opened the door for goals from Tomas Holes and the electric Patrik Schick, who scored his fourth goal in as many games. Just like that, The Orange were blacked out, 2-0.

The Czechs are dangerously underrated in midfield, where even with the man advantage, they dominated the Dutch. And if cyberspace has anything to say about it, Prague is in for quite the party.

Sportradar, a sports data provider, ran a pre-tournament simulation that predicted the Czech Republic beating Denmark in the finals. Are they two rounds too early with that prediction? 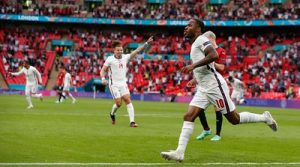 The unmistakable sounds of “Two World Wars and One World Cup” were rocketing all over Wembley Tuesday—and for once, it wasn’t England’s last desperate act of defiance. England’s 2-0 victory over its eternal blood rival, Germany, sent the entire country into equal measures ecstasy and relief.

Ecstasy that the team that took it out of the 1970, 1990 and 2010 World Cups and the Euro 1996 semifinals was done and dusted. Relief that England and its penchant for stepping on rakes in international tournaments hasn’t transpired—yet.

The Three Lions weren’t totally on point. They needed late goals from Raheem Sterling and the heretofore dormant Harry Kane to dispatch Germany. But England has yet to allow a goal in four games and unlike past generations, seems to relish this experience, rather than recoil from it. Five years ago, Iceland knocked England out of Euro 2016, forcing a wholesale wringing out of the program.

That 11 players on this England squad weren’t alive in 1996 lends itself to that freshness. And manager Gareth Southgate instilled a no-fear mentality in the Three Lions, getting the English FA to schedule matches with the powers of world football: Germany, Spain, Italy, the Netherlands and Brazil.

That should make Saturday’s game against a surprising Ukraine team that much easier. The oddsmakers think so, making England the +210 favorite to win the tournament. That’s as much a byproduct of England’s easier path to the finals as it is the Three Lions’ form. Based on the brackets, England wouldn’t see Belgium, Italy or Spain until the finals – if it gets there.

As for Ukraine and its +3,300 longest-of-longshot odds, its quarterfinal berth was brought to it by one of those improbable moments this tournament spawns almost on command. Artem Dovbyk, who came into Tuesday night’s Round of 16 game with Sweden carrying all of 51 minutes of international experience, buried a diving header in the 121st minute—just before the end of extra time.

That goal, brought to the Ukrainians by a player toiling for SC Dnipro-1 in the Ukrainian Premier League, gave Ukraine an are-you-kidding 2-1 victory over Sweden. The goal came via a perfect cross from Oleksandr Zinchenko right on Dovbyk’s forehead. It also came after Sweden’s Marcus Danielson kneecapped Artem Besedin with a wild tackle that drew the Swedish player a straight red card.

Get your Golden Lines Daily Odds Boost at GoldenNuggetCasino.com. Check in daily for enhanced odds and specials on your favorite sports.