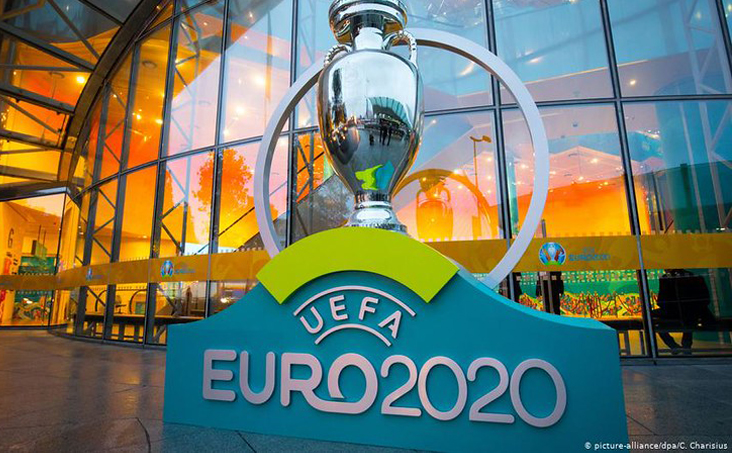 A heart attack on the pitch. A parachuting protestor. One player banned for insulting a rival. Another stays in, despite biting his opponent. And a little soccer thrown in for good measure. Welcome to Euro 2020.

So far, Euro 2020 has served up plenty of drama—and not all of it is related to soccer.

From a heart attack on the pitch to a parachuting protestor and player banned for insulting an opponent, this series has been intense. And then of course, there’s sports, and the ongoing battle among the world’s best soccer players.

First off, that’s not a typo—Euro 2020 is the title of the 60th European Championship. With the cancelation of last year’s event due to Covid, the title remains the same.

As does the format. Six four-team groups play round-robin games against each other. The top two teams from each group and the next four best third-place teams advance to the Round of 16. There, single-elimination prevails. And finally, one team remains after the July 11 finals at London’s Wembley Stadium. 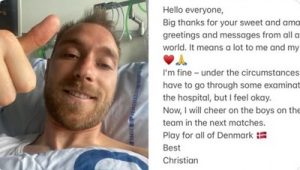 As mentioned above, this series started with a shocker.

Less than 24 hours into, during the second game between Denmark and Finland, Denmark’s best player, midfielder Christian Eriksen, collapsed on the pitch and went into cardiac arrest. He was literally brought back to life by doctors who shocked him back with a defibrillator.

Eriksen was whisked to a Copenhagen hospital. His distraught teammates resumed play, and Finland scratched out a 1-0 victory. It was the Finns’ first goal and first victory in a major international tournament.

From his hospital bed, Eriksen sent a photo to his 3.7 million Instagram followers, giving the thumbs-up sign. “I’m fine—under the circumstances,” he wrote. “I still have to go through some examinations at the hospital, but I feel okay.”

After that, support for Eriksen knew no bounds, including among the other 23 teams. After Belgian striker Romelu Lukaku scored one of his two goals in Belgium’s 3-0 opening victory over Russia in St. Petersburg, he yelled into a camera, “I love you, Chris.” The pair play together for Serie A champion Inter Milan.

In other news, Austrian forward Marko Arnautovic was banned for using “insulting language” toward an opponent, Germany’s Antonio Rudiger won’t be punished for appearing to take a bite out of France’s Paul Pogba in the opener, and Greenpeace apologized after a climate-change protestor managed to parachute onto the pitch and injure two people before Germany’s game against France. Munich police are investigating.

Bet $20 to win $100 on Euro 2020 —regardless of your wager’s outcome—at BetMGM.com. This offer is paid in free bets for new customers. 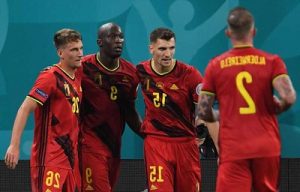 And now, back to soccer. As for Belgium, the Red Devils were pre-tournament favorites. In addition to Lukaku, Belgium boasts talents like midfielders Eden Hazard, Dries Meterens and Kevin De Bruyne, and standout goalkeeper Thibaut Courtois. According to head coach Roberto Martinez, the Red Devils are loaded with chemistry. They’re an easy pick to win Group B over Denmark, Russia and Finland.

Another pre-tournament favorite is England in Group D, especially after their grinding 1-0 opening victory over Croatia in a rematch of the 2018 World Cup semifinal. And especially since Gareth Southgate’s men get to play all their group games without crossing the Channel. Any competition they see will come from the Czech Republic.

Italy took a huge step toward winning Group A when it turned back Turkey in its opener. Switzerland always causes trouble for someone, and Wales, with Gareth Bale leading the charge, isn’t the same team that reached the 2016 semifinals.

Your first impulse may be to pencil in the Netherlands as Group C winner. Not so fast—not with a highly improved Austria team, and the Dutch in a state of transition and producing very inconsistent football. This manifested itself in the Netherlands’ 3-2 victory over Ukraine on Sunday. The Dutch scored two quick goals early in the second half, then went to sleep, spit back two, and were lucky to salvage all three points.

Spain is the prohibitive Group E favorite, even after captain Sergio Busquets left after testing positive for Covid-19. The 2008 and 2012 champions have more than enough firepower to turn back Poland, Sweden and Slovakia.

Then we come to Group F. Every tournament has its de facto “Group of Death.” Sometimes, two groups vie for that honor. Not here. Any group with the 2014 World Cup champion (Germany), 2016 European champion (Portugal), and 2018 World Cup champion (France) wins that title running away.

Players get a 20% profit boost for any Euro 2020 wager every day of Group Play through June 23 at BetRivers.com and PlaySugarHouse.com. 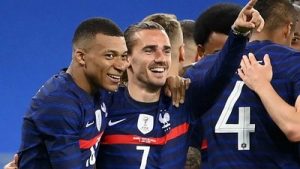 France is the pre-tournament betting favorite—no surprise, given the depth of talent the defending World Cup champions bring to the pitch. The French resistance begins with Kylian Mbappe, one of the best players in the world. He tormented the Germans in France’s 1-0 Tuesday victory, having a brilliant goal called back on an offside, but played a vital role in that one goal. His surging presence forced German defender Mats Hummels into a desperate stab at the ball that wound up in his own net.

There are attackers Antoine Grizemann and veteran Karim Benzema, midfielders Paul Pogba and N’Golo Kante, defenders Lucas Hernandez and Benjamin Pavard and ever-consistent goalkeeper Hugo Lloris. France is so deep its subs would start for three-fourths of the rest of the field.

Germany isn’t the blitzkrieg force it was during the middle of the last decade. But potent scorer Thomas Muller is back, as is standout goalkeeper Manuel Neuer.

Defending champion Portugal has the incandescent Cristiano Ronaldo back. He announced his – and his team’s – return by scoring twice against the poor Hungarians, who drew the short straw filling this group out. Ronaldo’s goals in front of the only packed stadium in the tournament – Puskas Stadium in Budapest – were his 10th and 11th European Championship goals.

That broke Michel Platini’s record of nine. And it did so in front of nearly 68,000 fans, because Hungary is the only one of the 11 venues not to limit attendance.

It also emphatically announced Ronaldo and Co. remain at the peak of their powers. Portugal may be even better than it was five years ago, when it upset France and hoisted the European Championship trophy.

Did you know offshore sportsbooks are illegal for bettors in the U.S.? Keep yourself and your bankroll safe. Only play with regulated sports betting providers, like the ones on this site.

Cruising for an Upset?

The European Championship is considered the second-best national tournament in the world, trailing only the World Cup. But unlike the World Cup, where only a handful of teams stand a reasonable chance hoisting that chalice at the end, upsets can and do happen.

Yes, Germany and Spain own the most titles: three apiece. France claims two of the 15. But countries such as Greece, Denmark, Czechoslovakia and Portugal are members of the winner’s club. For ready reference on how a hot outsider can ride its way to a title, see Greece 2004.

The Greeks came into Euro 2004 qualifying for exactly two major international tournaments: Euro 1980 and the 1994 World Cup. They failed to win a single game in either tournament.

No matter coming into 2004, when Greece knocked off host Portugal in their group-stage opener, then drew with Spain before losing to Russia. That would be the Greeks’ last setback. Playing a stingy, defensive, counterattacking style to perfection, Greece knocked off defending champion France, then took out the Netherlands in the semis, and finally Portugal in the finals – all three by a 1-0 score.

Yes, France is the favorite. Belgium, England and Italy aren’t far behind. Germany and Spain can’t be discounted. But it wouldn’t be a typo to see someone else crashing this party.

Breaking Down the St