HomeThe ShuffleExpert Tips for Winning at the Track

Expert Tips for Winning at the Track 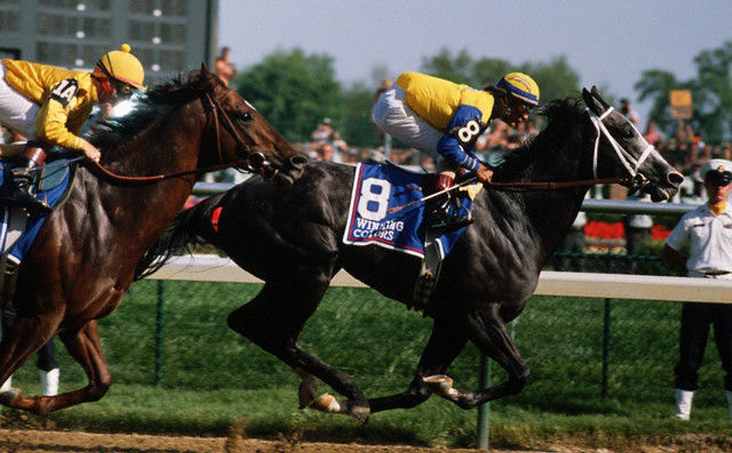 In 1988, Mark Paul risked his bankroll on an obscure racehorse named Winning Colors (l.) to win the Kentucky Derby. The bet paid off, winning Paul and two buddies $1 million. Now, the betting expert shares his secrets on how to wager—and win—at the track or sportsbook.

It’s been called the most exciting two minutes in sports: the fabled Kentucky Derby. In 1988, at a shabby Tijuana racetrack, race fans Mark “Miami” Paul and his pal Dino Mateo placed futures bets on an up-and-coming horse called Winning Colors. They wagered $5,000 on the long shot, at 100-1 odds. If they won, they’d be richer by a half-million dollars.

On race day at Churchill Downs, the fabulous filly took an early lead and never relinquished it. Winning Colors beat the boys, edged out the second-place finisher, Forty-Niner, and became one of only three fillies to win the Kentucky Derby (after Regret in 1915 and Genuine Risk in 1980).

Miami and Dino had won, but they had a problem. The Tijuana track where they placed the bet was owned by a Mexican cartel leader, who didn’t shrink from violence to settle scores and who wouldn’t willingly part with a half-million in U.S. dollars. A third pal, Big Bernie, had also bet big, bringing the total to a cool million.

Could Miami, Dino and Bernie claim their stash and make it across the border alive?

Their hair-raising adventure is recounted in Paul’s thrill-a-minute memoir, “The Greatest Gambling Story Ever Told,” subtitled, “A True Tale of Three Gamblers, The Kentucky Derby, and the Mexican Cartel.” The book pits the eager race fans against fearsome drug lords and makes a hero—make that heroine—of Winning Colors, one of racing’s most famous Thoroughbreds. The book, now an Amazon bestseller, has been optioned for motion pictures.

iGamingPlayer.com spoke to Mark “Miami” Paul from his home in Southern California, where he now owns a real estate business and continues to be an enthusiastic bettor.

iGamingPlayer: Share some basic tips on how to win at the track, the OTB or sportsbook. Do you start with the racing form?

Mark ‘Miami’ Paul: Absolutely. You need the information. Horse racing is a lot like poker; you’re betting against other players, not the house, and it’s pari-mutuel, so all you have to do is be better than the other players. If I could only say two things, I would tell people:

• No. 1, bet on horses that go to the front early and have early speed. Winning Colors did just that in all her races—she was blazingly fast, and she always went to the front, even when she was racing against the colts. She said, “Catch me if you can,” and from a gambling standpoint, that’s the way to go.

Statistically, horses that go to the front win far more, for a lot of reasons. Horses that are behind get dirt kicked in their faces, and they can get into traffic trouble.

So in the racing form, look for horses that consistently go to the front at the distance of today’s race or a shorter race. In other words, if you have a horse that goes to the front in a mile-and-a-quarter race, and today’s race is shorter, you might not have the same speed as you’d have in a sprinter. The racing form (based on past performance) shows where the horse has been at the quarter-mile, the half-mile and the finish.

• No. 2, don’t get carried away with exotic wagers, like trifectas and superfectas. Pick some winners and have some fun.

How else do you handicap a horse? Does pedigree matter?

I don’t look at pedigrees very much. Give me a horse that’s proven he can run in today’s conditions and who has early speed, and that’s good enough for me. I don’t care if his great-grandfather was Secretariat.

Do you size up the jockeys and trainers too?

Jockeys are important, but there are probably 15 high-quality jockeys who can get the job done at major racetracks like Santa Anita, Belmont, Gulfstream or Churchill Downs. I’m much more interested in the horse’s ability.

Trainers, on the other hand, are very important. You want to know that the trainer has a decent winning percentage. Even if the horse has never raced before, if you can see this trainer wins with 21 percent of his first-time starters, pay attention. If you look at a trainer who’s had 40 first-time starters and one winner, I won’t even glance at that.

You placed your bet on Winning Colors long before she was a favorite, and that’s why you won big. Talk about that.

It’s my favorite bet in the whole world—the futures bet—not just in horse racing, but in the NFL, NBA and all of sports. In the NFL, say I really like the Kansas City Chiefs. I check the odds today and say, “Hey, I can get 4 ½ to 1 on the Chiefs.” What’s great about that is that that team will probably be a major contender and make the playoffs. So for that one bet—let’s say $100—I get to watch and root for that team for 16 weeks, and then into the playoffs. I get a lot of action for one bet. I get a rooting interest for six months. But bet one hand of blackjack, and it’s over in five seconds.

I’ve heard that bettors shouldn’t try to pick outsiders, that favorites are favorites for a reason, and they’re your best bets. What do you say?

I couldn’t agree more. The average person going to the races is going to bet nine races, and it’s really not fun to go 0 for 9. For the most part, I would encourage people to take one good horse per race and bet that horse to win. You’ll get a lot of action during the day, betting good solid horses at lower odds.

Unfortunately, a lot of people make the mistake of playing lots of long shots and playing them in stupid ways—like taking three long shots to show. That’s the worst bet possible. If you’re going to bet, take your $30 and bet it all on one solid horse who has early speed and a trainer who knows how to win under today’s conditions.

By conditions, do you mean the weather?

I’m asking if the horse is running on turf or on dirt. Is he running a mile and 1/16, or only a one-turn sprint? It doesn’t matter if it’s snowing out. You want to see whether a horse is competitive in these conditions.

Again, just make some win bets on good horses that have good form. Do that, and you’re going to cash your share of tickets and have a lot more fun.

That said, there’s an old saying at the racetrack, “An expert on horse racing is anyone who’s been right once.”

For more information on Mark Paul, go to markpaulauthor.com or www.youtube.com

BetAmerica.com offers more than 5,000 races per week. Sign up to play for expert analysis, super promotions and a first deposit match up $100.

For one of the most breathtaking races ever, watch Winning Colors win the Kentucky Derby.

According to racing website TVG.com, keep this info in mind to place better bets: