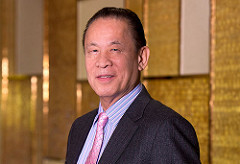 Universal Entertainment Corp., parent company of slot-maker Aruze Gaming, a pachinko and pachislot manufacturing empire and a planned casino resort in the Philippines, has announced its newly elected board of directors. The company’s founder, Kazuo Okada, is not part of it.

According to a company filing to JASDAQ, the company’s shareholders approved the new board at the 44th General Meeting of Shareholders, along with a “new executive officer system.”

Jun Fujimoto was re-elected as president, responsible for the domestic business, and is also the CIO and CEO.

Hajime Tokuda, who is COO of foreign business and corporate planning was elected as director, along with Takako Okada, and Kenshi Asano.

“The new structure is aimed at strengthening corporate governance procedures and further enhancements to the internal control standards of the company’s international subsidiaries,” said the company.

Okada, who is being probed for his involvement in a number of suspicious transactions involving company funds, promptly sued his wife, son and daughter to regain control of Okada Holdings Ltd., the holding company that owns the majority of Universal’s Tokyo-listed shares. Okada’s family took control of the board of directors in May.

Speaking to Reuters, Okada said he hoped the lawsuit would force his family to open negotiations on a settlement that would restore his position at Okada Holdings. “Unless I sue there will be no opportunity to talk,” he said. “The reality is I am in a losing position in terms of voting rights.”

Okada said he was “totally blindsided” by his removal from the board, and that his wife Takako Okada and son Tomohiro Okada conspired to keep him off the board and make Fujimoto the CEO. “I made Fujimoto president,” he told Reuters. “Now he wants to take over.”

The situation is also impacting another board struggle at Wynn Resorts. Elaine Wynn, the former wife of founder Steve Wynn, and owner of an equal amount of shares as her ex-husband, has been suing for the rights to sell those shares. Okada is also suing Wynn Resorts to be reinstated to the board of directors and to have his shares returned to him. Okada was ousted as vice chairman of the company after he pursued and obtained a license to operate in Manila and essentially compete with Wynn. His large amount of shares were bought by the company at a discount. With his current legal problems, it’s unlikely Okada would be successful in that quest, which would also affect the shares of Elaine Wynn, who was also ousted from the Wynn Resorts board last year.