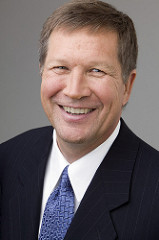 In early January Ohio Governor John Kasich signed a bill that legalizes fantasy sports gaming in the Buckeye State and places it under the regulatory arm of the Ohio Casino Control Commission.

The law excludes such games from including college or youth sports and doesn’t allow the activity to be advertised to minors or for those under 18 to play.

The new law was supported by the Cleveland Indians, Columbus Crew and Cincinnati Reds ball clubs and the Fantasy Sports Trade Association, whose chairman Peter Schoenke had testified to lawmakers that it was necessary to classify fantasy sports as a game of skill to end uncertainty and help the industry grow. He estimated that nearly 2 million in the state participate in fantasy sports each year.