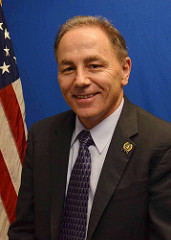 The move toward legal daily fantasy sports continues unabated across the nation.

New Jersey’s state Assembly Appropriations Committee has approved a DFS bill which will now move to the full Assembly for a vote.

New Jersey has not banned DFS games, which currently are not regulated in the state. Proponents say the bill is needed to provide consumer protections.

“The fantasy sports industry is a growing market year after year. The time is right for New Jersey to enter the fold with regulations aimed at providing strong consumer protections for our residents,” said Assemblyman Vince Mazzeo, one of the bill’s sponsors in a press statement. “This legislation not only protects consumers, but promotes a positive business environment for fantasy sports operators and their thousands of New Jersey customers.”

The bill applies only to daily fantasy sports sites—such as DraftKings and FanDuel—and not traditional season-long formats.

The bill puts DFS under the jurisdiction of the state Division of Consumer Affairs which would issue permits to fantasy sports operators as well as casino licensees and licensed racetracks that partner with fantasy sports providers.

Sites would have to pay a quarterly operations fee at about 10.5 percent of their gross revenue. The bill also bars players under the age of 18 and imposes fines for tampering with results.

In some other DFS matters:

Bills to regulate DFS sites have been introduced in Arkansas and Ohio.

In Arkansas, state Representative Jimmy Gazaway has introduced a bill that would regulate sites and tax them at about 8 percent on revenue.

The bill has been introduced, but hearing dates have not been set.

In Alabama, the legislature is considering three bills that would legalize daily fantasy sports gaming. State Senator Tom Whatley, sponsor of one of the bills, said, “To me, I don’t see it as the same type of gambling that I’ve been opposed to in the past such as the casino-type of gambling. It’s about the skills of picking teams that are playing once a day or a couple times a week.”

Last year, Alabama Attorney General Luther Strange, now a U.S. senator, declared fantasy sports gaming to be illegal in the state. The games became prohibited as of May 1, 2016. DraftKings and FanDuel, the two major DFS operators, received cease-and-desist letters and agreed to comply. Alabamians who log onto and register with FanDuel see this message: “We’re sorry, but your current location prohibits you from making deposits or playing on FanDuel.”

Alabama Attorney General Steve Marshall agrees with Strange’s position, said spokesman Mike Lewis. He said Marshall’s office is working with legislators to sponsor DFS bills that “ensure that necessary regulatory and enforcement provisions are in place.” Lewis added, “The office has offered no opinion or assurance to any legislator that the proposed law could withstand a constitutional challenge.”

Among the three DFS measures under consideration, HB354, which would establish a “Fantasy Sports Act,” seems the most likely to move forward. Similar to a measure recently signed into law by Mississippi Governor Phil Bryant, the bill would require a fantasy sports operator with more than 5,000 active player accounts to pay an initial registration fee of $85,000; an operator with fewer than 5,000 active participants would pay an initial fee of $10,000. An operator that previously has not operated in Alabama would pay a $5,000 fee. Marc La Vorgna, a spokesman for both FanDuel and DraftKings, estimated Alabama would receive $170,000 annually from fees paid by those two companies.

HB354 also would assess a 6 percent tax on a DFS operator’s gross revenue for the preceding 12 months. That tax revenue, an estimated $216,000, would go to the state’s General Fund.

State Rep. Craig Ford said lawmakers will “draw an arbitrary line in the sand” if they allow fantasy gaming but prohibit a lottery or casinos. He said any argument that fantasy sports is somehow different from gambling “is just plain silly.” Ford stated lawmakers should allow DFS and also should “vote on the lottery.” He said, “Legislators need to stop with this double standard. After all, I’m sure all of them have retirement accounts invested in the stock market, and that’s a gamble. They want to argue that fantasy sports is different just because it involves some level of skill. But so does any sports betting. For that matter, so does playing poker and blackjack.”

La Vorgna said HB354 includes safeguards such as requiring players be at least 19 years of age or older; prohibiting betting on high school, collegiate or youth athletic events; not allowing game scores or point spreads to determine a winner; and restricting advertising and marketing directed toward minors.

“Practical and common sense says this is a game of skill. The dominant factor in who wins is the skill of the player,” La Vorgna said.

Most pro-gambling bills in Alabama are on hold until the Governor’s Advisory Council on Gaming, which was formed last year, issues a final report and recommendations

Meanwhile, fantasy sports legislation also is being considered in Georgia, where former Atlanta Braves and Hall of Fame pitcher Tom Glavine recently visited the legislature to speak on behalf of HB 118, which would legalize and regulate fantasy sports. The bill, which has passed the House and cleared a Senate committee, would classify fantasy sports as legal games of skill, not chance.

Glavine said, “I argue that it’s more of a game of skill. It enhances and changes, quite honestly, the way I watch games sometimes. And on the other side of it as a player, I know the connection it brought with people to their favorite athlete.” Glavine said he counts himself among the estimated 1.5 million Georgians who participate in the online games.

HB 118 is sponsored by state Rep. Trey Kelley, who said, “I’m putting this measure forth because I think there are some consumer protections that need to be put in place for Georgians.”

However, Mike Griffin of the Georgia Baptist Mission Board said the bill is similar to the recently stalled casino bill that did not include the word “casino.” He said, “I think they need to be intellectually honest and say, ‘This is gambling.’”

In Ohio, a proposed bill would declare DFS games as games of skill and puts their oversight before the Ohio Casino Control Commission. Operators would pay an initial licensing fee of $30,000. The bill also adds consumer protections regarding employee play, problem gaming and segregation of player funds.

The Ohio legislature considered a similar bill in 2016, but the measure was not passed.