HomeThe ShuffleFavorites to Rule in NFL Divisional Round

Favorites to Rule in NFL Divisional Round 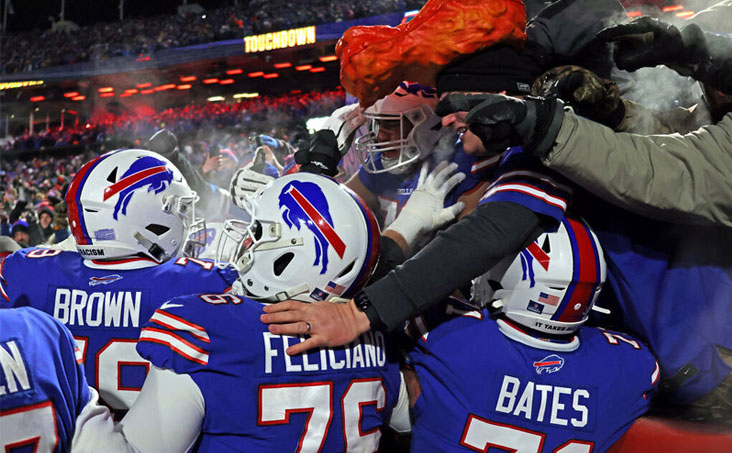 The lines for the NFL Divisional Playoffs are tight, and that should be an advantage for the favorites.

This weekend is the Divisional Playoffs, and the lines are a lot closer. While the Wild Card games saw lines of 12.5 and six points, none of the four divisional round games have a point spread greater than 5.5 points.

Will the underdogs fare any better in the NFL divisional playoffs? We take a look at the four games and give our predictions.

Tennessee: Too Many Weapons for Bengals 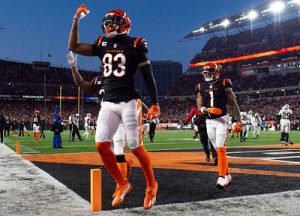 The Cincinnati Bengals survived their Wild Card game against the Las Vegas Raiders, winning in the postseason for the first time in 31 years. The victory featured the devastating combination of quarterback Joe Burrow and wide receiver Ja’Mar Chase. The two former LSU Tigers hooked up for 116 yards and showed the league they are going to be a potent weapon for years to come.

Now Cincinnati must travel to face the No. 1-seeded Tennessee Titans, who were rewarded with a bye. The Titans, rested and relatively healthy, are favored by 3.5 points, and their biggest advantage is the return of running back Derrick Henry. The veteran was knocked out of action in Week 8 and is making his return after two months.

Henry’s performance will be vital for two reasons. The first is the All-Pro should be able to take advantage of a Bengals defensive line that lost defensive tackle Larry Ogunjobi to a foot injury.

If Henry can be effective on the ground, that will open up the passing game for Tennessee quarterback Ryan Tannehill. When that happens, it could be tough for Cincinnati to overcome.

The Bengals have the offense to match the Titans. But they’re down on defense and that’s where Tennessee will prevail. The Titans should win this game by a touchdown.

Get One-Game NFL Parlay Insurance at BetMGM. Opt in and place a football one-game parlay wager with four legs or more. If you miss one leg, you’ll get $25 back. 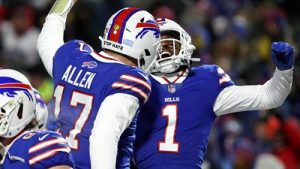 Both the Kansas City Chiefs and Buffalo Bills looked like Super Bowl contenders in their Wild Card victories. The Chiefs destroyed the Pittsburgh Steelers, 42-21, while the Bills beat up on AFC East rival the New England Patriots, 47-14.

But it’s hard to tell anything from those victories. The Steelers lucked their way into the playoffs, while the Bills solved Patriots coach Bill Belichick for the second time this season. It probably doesn’t do gamblers any good to look at the October 10 meeting between Kansas City and Buffalo. The Bills won that game 38-20, but the Chiefs are a much better team now. That’s evidenced by the 2.5 points they are laying in this game.

While Kansas City has improved, the team still lags behind Buffalo in one important area—defense. The Bills are first in total defense, while the Chiefs are 27th.. That’s where the game will be won. Both offenses are potent, but if Buffalo can get more stops than Kansas City—and the statistics suggest they will—they will not only cover, but will win outright. 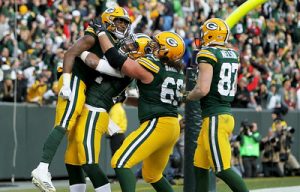 When the Green Bay Packers secured the No. 1 seed in the NFC, they not only got a first-round bye, but home field advantage throughout the playoffs. This time of year in Wisconsin the weather is brutal, and that’s a much bigger advantage than realized.

Especially when your opponent is from California. The San Francisco 49ers, who squeaked by the Dallas Cowboys 23-17, now have to play their second consecutive road game. This time in projected 13-degree weather.

Traveling to Lambeau Field to take on the Packers will be tough enough. Green Bay is peaking at the right time, and was able to rest up with the week off. They are getting back center Josh Meyers and All-Pro tackle David Bakhtiari. Giving quarterback Aaron Rodgers more time to throw is never a good thing for opponents.

As good as San Francisco has been this season, this is where their playoffs end. This line moved from its opening number of 4.5 points to 5.5 in favor of Green Bay. It won’t be that close.

Bet the Divisional Playoffs at Resorts and you win, no matter what the scoreboard says. Resorts hands you cash back on your monthly sports losses, up to $10,000. That’s right—cash, not bonuses or free bets. 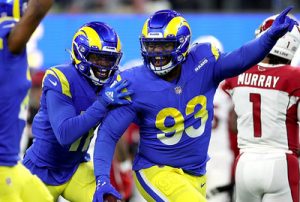 The L.A. Rams were the last of the NFL Wild Card teams to move on to the Divisional Playoffs, and will travel to face the Tampa Bay Buccaneers. There should be some concern that the Rams are on a short week, having played on Monday and now having only six days to prepare for the defending Super Bowl champions.

It would be much more of a concern if the Buccaneers weren’t so banged up. The offensive line is hurting, and with Rams defensive tackle Aaron Donald in postseason form, quarterback Tom Brady might be getting pressure from the All Pro for most of the game.

Rams quarterback Matt Stafford looks capable of advancing his team to the NFC Championship, and the run game should help him again on Sunday. The Rams are three-point underdogs, but should win this game outright.

New players at Caesars Sportsbook can score a first-bet match of up to $1,001 on the road to Super Bowl LVI. Get in the game for the NFL Playoffs’ Divisional Round!

New to online betting? These tips can help you get started.