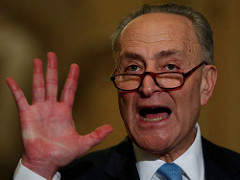 Bipartisan support is mounting in Congress for lawmakers to take up the question of whether to regulate sports betting at the federal level.

With statehouses across the country moving quickly to legalize the industry after the Supreme Court in May struck down a decades-old federal ban, New York Democrat Charles Schumer, the Senate’s minority leader, has joined Utah Republican Orrin Hatch, who chairs the Finance Committee, in proposing that Congress intervene to protect vulnerable consumers and shield sports contests from the threat of gambling-related corruption.

Since the high court’s ruling, Delaware, New Jersey and Mississippi have legalized, while West Virginia, Pennsylvania and Rhode Island could have regulations on the books before the end of the year. A study from Eilers & Krejcik Gaming expects as many as 30 states to be on board in the next five years. The boon to operators in the form of revenues could hit $10 billion, according to Barclay’s.

“The stakes are too high—legal sports betting laws must be crafted and executed in a careful and thoughtful way,” Schumer said in a statement. “The integrity of sports is too precious to not protect as best we can.”

Hatch, a co-author of the 1992 ban the Supreme Court axed, took to the Senate floor late last month to warn of the risks of game-fixing. Citing a 2017 World Cup qualifying match between Senegal and South Africa that had to be replayed after the referee came under suspicion, he announced that he’s drawing up a regulatory bill for introduction in the Senate in the coming weeks.

With nearly one-third of the Senate up for re-election in November it’s not expected that any such legislation will be considered before 2019. But Schumer has followed with an outline of the provisions he would like it to contain.

For starters, he wants betting limited to adults 21 and older and a ban on betting advertisements targeting young people.

Athletes, coaches, game officials, teams and league representatives would be prevented from taking a financial stake in a wager. This could force several owners with investments in daily fantasy provider DraftKings, among them Jerry Jones of the Dallas Cowboys and Robert Kraft of the New England Patriots, to sell their stakes as DraftKings transitions from fantasy sports to bookmaking.

Schumer also is calling for mechanisms to be put in place to combat money-laundering and other criminal activities that could arise as sports books spring up from state to state.

“As a New York sports fan—especially my Yankees and Giants—and a senator, my priority is making sure the integrity of the games we love is preserved, that young people and those suffering from gambling addiction are not taken advantage of, and that consumers that choose to engage in sports betting are appropriately protected.”

Other, more controversial proposals include granting sports leagues a say in the kinds of bets operators may accept and requiring that they use only official league data in determining wagering outcomes, which is likely to cost them in the form of royalty payments to the leagues, although Schumer’s plan doesn’t specifically mention these.

Not surprisingly, his proposals are getting a thumbs up from the sports world.

“As legalized sports betting spreads across the states there is a need for consistent, nationwide integrity standards to safeguard the sports millions of fans love,” the NBA, Major League Baseball and the PGA Pro Tour said in a joint statement. “We strongly support the legislative framework outlined by Senator Schumer, and we encourage Congress to adopt it.”

Operators, on the other hand, and many state lawmakers, oppose the involvement of sports organizations in critical aspects of their business. New Jersey, for one, specifically rejected giving the leagues an official role when it legalized in June.

“In New Jersey, it’s working OK. Why do we need federal legislation?” said Jeff Gural, owner of Meadowlands Racetrack, which opened its sports book in August.

“If you look at wagering on horseracing, there is no federal legislation. Every state regulates it,” he said. “Every state has its own rules for lotteries.”

He argues, moreover, that as in-game wagering becomes more widespread, leagues will find they are making out better than ever.

“You’re going to see TV ratings and ticket sales rise dramatically. The leagues are going to be very happy.”

“The casino gaming industry shares Senator Schumer’s goal in preserving the integrity of sporting events and providing consumer protections,” said Sara Slane, vice president of public affairs. “Federal oversight of sports betting was an abject failure for 26 years, only contributing to a thriving illegal market with no consumer protections and safeguards. New federal mandates are a non-starter.”

She added, “The casino industry is working with stakeholders to ensure the proper protections for consumers, and the integrity of bets and sporting contests are included in state policy, universally implemented by all operators in those states and overseen by effective state and tribal gaming regulators.”

Most observers don’t think that anything will come of this federal effort, but when you add in the Senate’s newest member, Jon Kyl, who was named last week to replace the recently deceased John McCain, there could be some doubt.

Kyl was one of the prime movers in the passage of the Unlawful Internet Gambling Enforcement Act through Congress in 2006. The UIGEA bill made it a crime to solicit online gambling in the U.S. and forced many of the larger online gaming sites to withdraw from the U.S. However, it eventually set the stage for the legal online gaming that is now being conducted in Nevada, New Jersey and Delaware—and soon Pennsylvania.