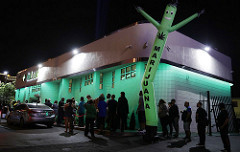 Las Vegas was eyeing a potentially lucrative business in pot lounges, but that’s been put on hold in the wake of plans by the federal government to make life difficult in states that have legalized or plan to legalize marijuana.

The city of Las Vegas and the larger metropolitan area of Clark County said neither of their governments will be moving any time soon to authorize the venues after U.S. Attorney General Jeff Sessions issued new Justice Department guidance that rescinds a hands-off policy adopted under the Obama administration.

“The memo caught a lot of people off guard, that’s the tough part,” said Bryan Scott, assistant city attorney for Las Vegas. “There are a lot of prominent citizens involved in this industry and it would be good to have some certainty.”

The city had planned to meet with stakeholders in the new industry to discuss a proposed city ordinance to open public lounges where adults could consume pot, which has been legal for recreational purposes in Nevada following a 2016 voter referendum that prompted the state Legislature to authorize it last July.

The ordinance also would permit lounge owners to obtain separate licenses to sell marijuana paraphernalia, like pipes, T-shirts and bongs, and potentially serve food at the lounges as long it did not contain weed.

But the Sessions memo appears to indicate that the Justice Department will no longer be guided by two Obama-era memos advising federal attorneys in pot-legal states to narrow their prosecutions to offenses such as distribution of the plant to minors, driving under the influence or use on federal property.

The Clark County Commission also has shelved―“indefinitely,” according to commission Chairman Steve Sisolak―discussions leading to authorization of the lounges county-wide.

“We’ll be challenged by this, but at this point we really just have to wait and see,” Sisolak said.

Currently, recreational marijuana is legal in eight states and the District of Columbia and allowed for medical purposes in another 19. Nationally, though, the types of lounges proposed in Las Vegas would be a first. Denver has come close with similar legislation but the effort has stalled in the face of ambiguities in Colorado state law and opposition from city officials.