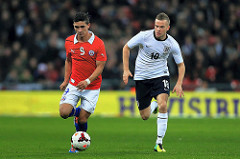 Five players and two officials have received worldwide sanctions from FIFA stemming from incidents of match manipulation and betting according to FIFA’s disciplinary code.

According to FIFA, they include:

The official Nicholas Bunyard of England was banned for betting activity by the Regulatory Commission of The Football Association from any kind of football-related activity (administrative, sports or any other) for a period of “four complete football seasons”. The official is banned until 1 July 2019.

The player Jang Paek Ho and the official Yung Jong Su of Korea DPR were suspended for a period of twelve months by the AFC Disciplinary Committee for bringing the game into disrepute following the deliberate conceding of a goal. The suspensions cover all type of matches, including domestic, international, friendly and official matches. Both the player and the official are suspended until 3 November 2017.

The players Saynakhonevieng Phommapanya, Moukda Souksavath, Chintana Souksavath and Phattana Syvilay of Laos were provisionally banned for suspected match manipulation by the Acting Chairman of the AFC Disciplinary Committee from any kind of football-related activity (administrative, sports or any other) for a period of sixty days. The players are provisionally suspended until 3 January 2017.

FIFA said in a press release it will continue in its ongoing efforts to combat match manipulation through a variety of initiatives which include the monitoring of international betting markets via FIFA’s subsidiary Early Warning System (EWS) and a confidential reporting system with a dedicated integrity hotline and e-mail address.