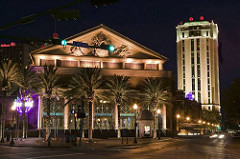 The entertainment company Live Nation will open the multi-million dollar Fillmore at Harrah’s New Orleans early next year, in the downtown casino’s second story. With a capacity of 2,200 people, the venue will have a lobby bar, VIP lounge and main music hall.

Live Nation Chief Operating Officer for Clubs and Theater Ben Weeden said the venue will present about 60 concerts in its first year, then 100 shows annually. “It’s a volume business,” he said, adding the Fillmore will offer an eclectic mix of contemporary rock, rap and alternative acts.