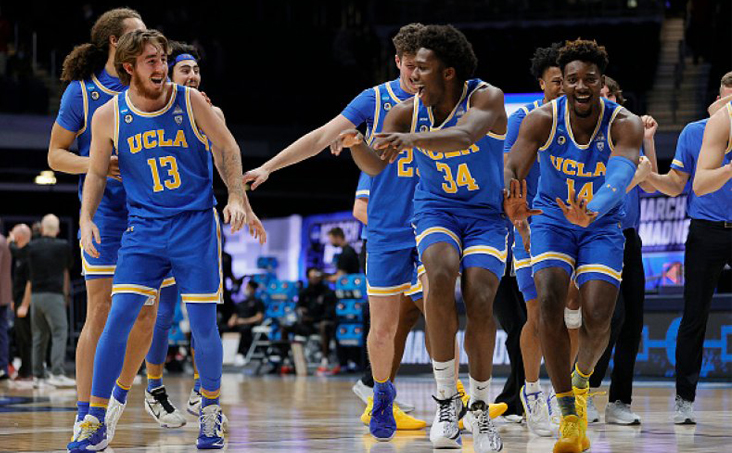 The NCAA Final Four in both men’s and women’s basketball has a lot of great storylines, but nothing can so far beat the return of the UCLA Bruins, which have gone from the First Four to the Final Four.

Back in the day, when you thought about college basketball excellence, you immediately thought UCLA Bruins. They regularly had their ticket stamped for a trip to the Final Four.

The California powerhouse won 10 national titles in 12 years between 1964 and 1975, including seven in a row. Legendary coach John Wooden steered a program that included at times Kareem Abdul Jabbar (then known as Lou Alcindor), Bill Walton, and Marques Johnson, among other luminaries.

But those days are long past. Since Wooden’s departure, the Bruins have been good, but not excellent. They won just one more national title in the post-Wooden era, in 1995.

Even this year, UCLA has often been forgettable. The team started the year with a 8-9 record, only to rally later on to finish second in the Pac 12. The Bruins were ousted in the first round of the league tournament, and only reached Field of 64 for the NCAA tournament by defeating Michigan State as a member of the “First Four”—four teams that played for the final two spots in the field.

Get Buzzer Beater Insurance through April 5 at BetMGM.com! That’s right—get your stake back up to $40 if your team loses at the buzzer!

As an 11 seed, the Bruins had to vanquish the BYU Cougars, the Abilene Christian Wildcats, Alabama’s Crimson Tide, and finally the Michigan Wolverines in a thrilling conclusion to the Elite 8. The Bruins are the first team to reach the Final Four as an 11 seed, and only the second First Four team to advance to the Final Four.

Now the task gets much harder. All the remaining teams are number 1 or 2 seeds in the tournament—the Gonzaga Bulldogs, the Houston Cougars, and the Baylor Bears. And the hardest game comes first. UCLA will have to take down Gonzaga, which enters the Final Four unbeaten, only the 11th team to accomplish that feat. Seven of those teams went on the win the title, with Indiana the last in 1976. UCLA has done it four times!

Get in on Mystery Madness through April 5 at PlaySugarHouse.com! Come back each day through the NCAAB Championship for a new offer every day!

Gonzaga’s path to the NCAA Final Four has been ridiculously easy, reflecting how their season went. The Bulldogs have won only one game by fewer than 10 points all year. They’re 4-0 against the spread in the tournament. They seem to be unstoppable, and the point spread against UCLA is the biggest in Final Four for the last 25 years—14 points, according to BetMGM. Bet the money line on UCLA and you get 7-1 odds. Conversely, betting on the Zags to win you have to lay $12 to win $1.

William Hill oddsmaker Nick Bogdanovich says betting should be interesting on this game.

“You just don’t see 14 in the semis, it’s a monster number,” Bogdanovich said. “I can’t see it going any higher than that. Michigan was -7.5 against UCLA and it went down to -6.5, so the professionals were on UCLA there. So I’m assuming that they’ll be on them again here, but I don’t know for sure. It could very well be a professionals versus the masses game.”

Betting the Final Four? Register a new account at WilliamHill.com. If you lose your first bet, you’ll earn a Free Bet in equal value up to $500!

The other side of the bracket is a bit more sensible. In an all-Texas showdown, Houston’s the underdog and is getting 5 points. Betting them to win is +175. Baylor is giving -215 to win. This is a compelling matchup, since both teams are near the top in both offensive and defensive efficiency.

Baylor has been something of a Gonzaga-like steamroller this year. The Bears started 18-0 before suffering some late defensive lapses. In the NCAA tournament, they had a tough time putting away the scrappy Villanova Wildcats, and had to race to better a quick Arkansas Razorbacks team in the semis.

Could there be a showdown between Baylor and Gonzaga in the championship? The Bulldogs and Bears were scheduled to play each other on December 5. That game was cancelled due to Covid-19.Would the Zags still be undefeated if that game hadn’t been cancelled? There’s one way to determine which team is better — if they meet in the national championship game April 5. That could be a great game.

And if the Cinderella run of UCLA continues, it could be a very emotional game for all.

But let’s not forget the ladies! The Women’s Final Four starts Friday, and its storyline is also compelling.

Like UCLA, basketball excellence has resided in Connecticut over the past two decades. The UConn Lady Huskies has won 11 national titles under coach Geno Auriemma, including a women’s record of four consecutive victories. Auriemma has had legendary women play for him, the way Wooden had with the guys. But the program hasn’t won a title since 2016, and during that period, other colleges caught up with the Lady Huskies. Not that UConn has fallen very far, winning 28 of 29 games. This year will be the 13th consecutive Final Four for the team, and they’re the top seed in their region.

Get $100 when you bet $20 on sports wagers at BorgataOnline.com! Just make your first wager of $20 or more at Borgata Sports and receive $100 in free bets.

Their opponents in the semi-final will be the Arizona Wildcats, making their first appearance in the Final Four. Like the other three teams, Arizona is the top seed coming out of its region.

Although Connecticut has more experience as a program, only two players have NCAA Final Four chops, so Arizona could surprise. It’s the new guard represented by Arizona coach Adia Barnes versus the old-school Auriemma. Should be an interesting match.

In the other bracket, the Stanford Cardinal has made its 14th Final Four, with a balanced scoring lineup and a propensity to score points in bunches. The Cardinal will face the South Carolina Gamecocks, with former WNBA star Dawn Staley as coach. It’s the extraordinary defense of the Gamecocks that may make them competitive with the high-flying Cardinal, but it wouldn’t be surprising to see experience win out again and create a rematch of two of the most storied programs in women’s basketball, Stanford versus Connecticut.

Will we see favorites prevail, or will this be a Final Four fantasy come true for a Cinderella team? Either way, there should be some exciting hoops action en route to cutting down the nets.

The NCAA Final Four will be broadcast live on TBS, CBS, TNT, truTV and their digital platforms, including March Madness Live.