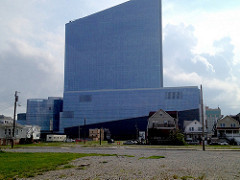 New York-based Keating & Associates LLC doesn’t appear to be taking no for an answer in its efforts to buy the closed Revel Atlantic City property and has now contracted to buy a one-acre site adjacent to Revel.

Keating has made a $225 million offer for Revel, but the site’s owner Glenn Straub has denied he is in negotiations with the company. For that matter, Straub has denied that he is in negotiations with another firm, Colorado-based Ten RE ACNJ, run by Colorado-based businessman Bruce Deifik, which has made two regulatory filings in the state indicating it is about to purchase the property.

That leaves it unclear whether Keating will simply be a neighbor to Revel, or if their purchase will be part of the overall complex.

According to the website Philly.com, the private equity firm has made a nonrefundable deposit toward an $8 million purchase of the vacant tract. The site is east of the revel property between Rhode Island and Metropolitan Avenues chief strategist Alex Fredericks said in an email to the site—which represents the Philadelphia Inquirer and Philadelphia Daily News.

The current owner of the site, Lazocean LP, had planned a 30-story, 124-unit condominium complex with 4,400 square feet of retail space to be known as the Metropolitan at Revel Beach. The project, however, was abandoned after the Revel closed in 2014.

Keating said in a press release that they have similar plans for the site and would seek a zoning change to enable heights of 40 to 50 stories so that more retail and restaurant space could be accommodated.

“We see such a bright future for this end of the boardwalk,” Keating co-chairman Jeffery Keating said in the release. “There are some really exciting days ahead, and we feel really blessed to be a part of the future of Atlantic City.”

Despite the emergence of Ten RE ACNJ as a contender for Revel itself, Keating officials said they still hope to acquire the former casino.

“We are working between our counsel and Mr. Straub’s to come to a conclusion on the Revel that we are still feverishly excited about,” he said. “The Metropolitan project will only enhance our position and objectives.”