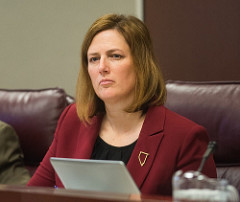 The first female head of the Nevada Gaming Control Board was named last week when Governor Brian Sandoval named state Senator Becky Harris as chairwoman. Harris is an attorney with Jerimy Kirschner & Associates, holds a Master of Laws (LL.M.) in Gaming Law and Regulation from UNLV’s Boyd School of Law, in addition to a J.D. from Brigham Young University, a master’s from UNLV and a bachelor’s from Brigham Young. She is a member of the bar in Nevada and Virginia, as well as the U.S. Supreme Court.

“Nevada’s gaming regulatory structure is the best in the world and it is imperative that the public servants who serve on this commission are beyond reproach and willing to make difficult decisions,” Sandoval said. “Becky has served her community as an elected official and worked to pass legislation which codified the e-gaming decision made by the Gaming Policy Committee which authorized e-gaming competitions, helped spur innovation in gaming, and ensured Nevada remain on the forefront of new opportunities in one of our state’s oldest industries.”

She replaces AG Burnett and will serve the one year remaining on his four-year term. Sandoval’s term ends one year from now and there is no requirement for his successor to re-nominate her.

Harris told the Nevada Independent it was a difficult decision to give up her Senate seat, and she admitted there were some political implications she had to consider.

“I feel a responsibility to shepherd my seat. However, the world is not static, and different opportunities come up at a time when it’s least convenient,” she said.

As for the short term of her appointment, she was sanguine.

“It’s a one-year appointment, and I’m cognizant of that,” Harris said. “But I believe this is the right opportunity for me, and we’ll see what happens in a year.”