The College Football Playoffs are set, as are the more than 40 bowl games and there is value everywhere. Check this out before you fill out your betslips.

We know going in to the endless bowl season that begins Friday, Dec. 16 with four bowls recognizable only to their staff, cities and the two teams playing in them, and ends Monday, January 9 with the College Football Championship at SoFi Stadium in Los Angeles that the Georgia Bulldogs, Michigan Wolverines, TCU Horned Frogs, and Ohio State Buckeyes won’t have a motivational problem.

Those four are the last four teams standing, the last four teams with a chance to play for that national championship. They’ll take the first steps toward that on New Year’s Eve, when No. 1-ranked Georgia take on No. 4 Ohio State in the Peach Bowl and No. 2 Michigan tangle with No. 3 TCU in the Fiesta Bowl.

In what is essentially a home game for the defending-champion Bulldogs, they go into Atlanta as 6.5-point favorites against an Ohio State team thrown a lifeline when the previous No. 4 USC Trojans decided that what happens in Vegas concerning their national title hopes stays in Vegas. They were on the wrong end of a 47-24 poleaxing by the Utah Utes in the Pac-12 Championship Game. 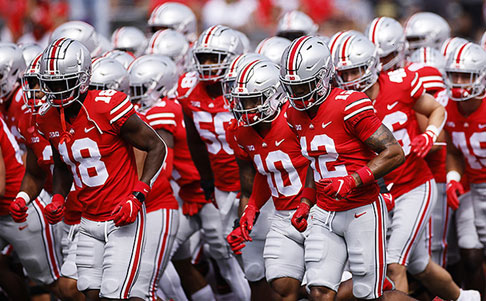 The Buckeyes were +1,100 to win the national championship last week. They’re now +350 at BetMGM. Georgia was -165 favorites last week. Facing a feral Ohio State team thankful for the mulligan, the Bulldogs are down to -145. Somewhat surprisingly, only 8.8% of the tickets at BetMGM have Georgia defending its national title.

Meanwhile, Michigan opened 10-point favorites against a TCU team that lost the Big-12 Championship to the Kansas State Wildcats , yet held serve in the CFP by virtue of that being its one and only loss. That line, meanwhile, dropped to 7.5 points, coinciding with Michigan’s odds bump from +275 to +350 over the past week. But a Michigan national title presents one of the biggest liabilities for BetMGM, which reported that 13.5% of tickets have the Wolverines lifting the trophy at SoFi.

As for TCU, had your crystal ball been working, you could have had TCU to win the national title at +15,000 opening the season. The Horned Frogs were +1,000 last week, taking a bump this week to +1,600 after their Big-12 loss to Kansas State.

Take advantage of an Early NCAA Football Payout at Bet365. Get your straight bets or parlay selections paid out if the team you back gains a 17-point advantage.

That brings us to the biggest variable in bowl season: who actually wants to be there? Contrary to popular belief, not every player thinks a trip to El Paso, Shreveport or Jacksonville in December is the be-all, end-all of their season. How much motivation is the Cheez-It Bowl to one-time powers the Oklahoma Sooners and Florida State Seminoles?

This even carries over to the alpha bowls, like the Rose Bowl Game. In 1998, the UCLA Bruins had just put away cross-town rival USC to vault to No. 2 in the country. But the Bruins had to play a make-up game against the Miami Hurricanes two weeks later, thanks to an earlier hurricane.

When the Hurricanes beat UCLA 49-45, the dispirited Bruins were relegated out of the BCS title game and into the Rose Bowl Game, where a hungry Wisconsin Badgers team lay in wait. Wisconsin’s 38-31 victory was as predictable as the second ring on a phone.

That brings us back to USC, which had one job: beat Utah and book a spot in the CFP. The Trojans couldn’t do it, fell out of the final four and find themselves not in Atlanta or Phoenix for New Year’s Eve, but in Dallas January 2 for a Cotton Bowl date with a Tulane Green Wave team that—like the 1998 Badgers—is beyond thrilled to be there.

That line opened with the Trojans favored by one. Despite USC’s obvious disgust for playing in Big-D, the line is now up to 2.5. But USC coach Lincoln Riley is 1-3 in bowl games and do the Trojans really want to be there? Another option here is looking at both team’s manic offenses and depressive defenses and taking the Over 62.

The second factor to watch is defections. Lately, it has become common for high-profile players to duck out of bowls—especially the lesser bowls—in order to preserve their health and possible NFL draft spot.

This makes underdogs top dogs when it comes to betting. Take Big-12 champion Kansas State, who find themselves four-point underdogs to the Alabama Crimson Tide in the New Year’s Eve Sugar Bowl. That line opened with the Tide favored by 6.5. But will Alabama’s Heisman Trophy-winning quarterback Bryce Young and All-American linebacker Will Robinson play? If not, grabbing the Wildcats on the money line at +190 is a savvy wager.

Get These Games on Your Betting Radar 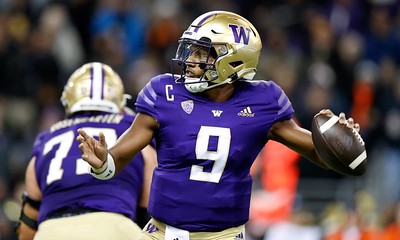 There are under-the-radar games to watch. Games like the Dec. 27 First Responders Bowl in Dallas, where the Memphis Tigers sit as an eight-point favorite over a Utah State Aggies team that has struggled over the second half of the season. While both teams are 6-6, four of Memphis’ six losses were by a touchdown or less.

Making the Tigers’ task easier is Utah State’s below-average defense both on the ground and through the air. The Aggies are allowing 5.1 yards-per-carry, which is 121st in FBS, and 123rd in explosive passing (more than 20 yards) allowed.

Another one to watch is the Dec. 28 Alamo Bowl in San Antonio, which pits the 8-4 Texas Longhorns against the 10-2 Washington Huskies. The Longhorns opened as 3.5-point favorites, largely due to them basically having a home-field advantage.

That line went up to six, which screams value for a Washington team featuring one of the country’s best-kept secrets in quarterback Michael Penix Jr., along with a sizzling Huskies team playing as well as any team in the nation. Washington hasn’t lost since the Arizona State Sun Devils somehow upended it 45-38 on Oct. 8.