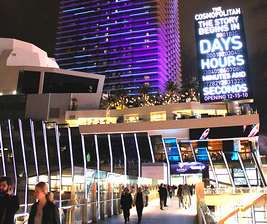 August data compiled by the state of Nevada show the Cosmopolitan (l.) with the highest number of known positive test results, at 304. But state officials say it’s impossible to know where the infections actually occurred.

Nevada health investigators have ranked Las Vegas casinos higher than other businesses in the surrounding region as “possible exposure sites” for Covid-19.

Data obtained by the Las Vegas Review-Journal show The Cosmopolitan on the Las Vegas Strip at the top of the list of exposure sites based on five analyses conducted in July and August, with other Strip resorts also near the top.

State officials and casino representatives, however, contend the data is not clear on whether the resorts are generating infections or are part of the larger movement of the potentially deadly virus. They emphasized their analyses do not pinpoint where people caught the virus but list locations most frequented by people during the time period when they probably became infected.

“This is more a reflection of general community spread than a specific issue with the employer or business, but it deserves investigation from the appropriate regulatory entities to confirm,” said Shannon Litz, a spokeswoman for the Nevada Department of Health and Human Services.

The Review-Journal requested the data after a June report in which Cosmopolitan workers said they felt unsafe at the property, that visitors were routinely disregarding safety guidelines and that management was not being forthright about the numbers of their fellow employees who were contracting the disease.

“Since reopening in June, we have implemented and enforced an extensive set of health and safety policies and procedures, all of which meet or exceed the directives from local health and government authorities,” the property said in a statement. “As we, along with our industry and country, further navigate through this unparalleled time, we continue to adapt our practices to ensure we are in alignment with the latest knowledge and guidance from medical and safety professionals.”

As of September 17, local health officials reported more than 63,000 residents of Las Vegas and surrounding Clark County had contracted the virus and more than 1,300 had died from it.

The August data obtained by the Review-Journal and covering 30 days of contact tracing and other monitoring showed that of around 5,300 infected people who volunteered responses, almost 1,600, roughly one in four, reported being at a hotel or motel. Of those, about 1,300 said they had visited the Strip.

The only non-casino location with comparable numbers was the Clark County Detention Center, which tests all inmates. It ranked fourth overall with 93 cases.

The second-largest group of possible exposures, about 1,360, were in a non-specific “other” category, which the state said represents businesses that do not align with other listed categories.

“Food establishments,” a broad classification including both restaurants and grocery stores, ranked third with about 700 cases.

The Cosmopolitan’s statement went on to say that the data “does not describe where or when someone contracted Covid-19, but merely what locations they visited during a certain period of time.”

Health experts interviewed by the Review-Journal dispute that.

“The argument that they could have gotten this anywhere else, while that may be true, it is not reflected in the data,” said Oscar Alleyne, an epidemiologist and a senior adviser with the National Association of County and City Health Officials.

“This is suggestive at the very least there is something going on at the Cosmopolitan that needs to be fixed,” said North Carolina State University Professor Julie Swann, who served as an advisor to the U.S. Centers for Disease Control and Prevention for the H1N1 pandemic response.

The analyses did not delineate between workers and patrons, leading Brian Labus, an epidemiologist who serves on Governor Steve Sisolak’s medical advisory board for Covid-19, to suggest the data could be skewed in this respect.

“I can’t imagine (Cosmopolitan’s) testing program is way better than anybody else’s, but they do have a lot of positive (test results) in comparison to everybody else,” he said. “If I was at the (Southern Nevada) Health District, that would definitely be something I’d want to look into a lot more.”

Employee testing policies vary by operator. Wynn Resorts, which tests on a regular basis, has said that nearly 550 of its staff have tested positive. Las Vegas Sands, which also tests heavily, has reported more than 400 positive results.

Others, like MGM Resorts International, test all employees who are new or returning to work but do not mandate tests for the majority of employees.

Complicating the process is that when tourists test positive in their home state after visiting Las Vegas that information frequently does not make it back to Nevada, whose officials have yet to identify any spreading events or case clusters beyond those at nursing homes and other state-licensed facilities.

Around 2.5 million people visited the city in July and August.

“The only way in which we can have a more targeted intervention, that will keep large sectors of the economy open while bringing the case numbers under control, is to understand more specifically what the risk factors are within the hotels and casinos,” Scarpino said.