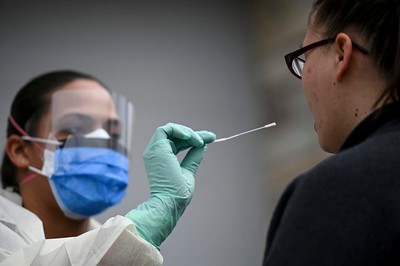 It started with Las Vegas Sands and Station Casinos. Now, with the industry counting down to an expected June reopening, MGM, Caesars and Boyd have joined forces with local health officials and the Culinary Union to provide free Covid-19 testing for the 90,000 Southern Nevadans they employ.

The program, launched last week in collaboration with University Medical Center and the Culinary Union, brings the three operators in line with Las Vegas Sands and Station Casinos, which previously announced plans to test their Las Vegas employees prior to an industry-wide reopening expected to occur sometime around June 1.

Combined, Caesars, Boyd and MGM employ some 90,000 people at 33 gaming and non-gaming resorts in the Las Vegas Valley, 21 of them on the Las Vegas Strip.

Testing for the workers will be conducted by appointment at the Las Vegas Convention Center, where it’s expected up to 4,000 blood samples will be taken daily and results will be available within 48 hours. Any positive tests will be sent to the Southern Nevada Health District for treatment options and contact tracing.

Boyd is making the tests mandatory, as Station and LVS have done, while MGM and Caesars are taking a voluntary approach. Caesars’ employees will be given a prescreening questionnaire to complete prior to testing, the company said. MGM said it plans to monitor returning staff daily for possible signs of the virus, regardless of whether they took test.

Geoconda Arguello-Kline, secretary-treasurer of the Culinary Union, hailed the partnership, saying it “ensures that Culinary Union members are safe when they return to work.”

The union represents about 60,000 gaming and hospitality workers in Las Vegas and Reno.