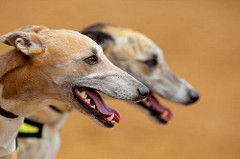 The Florida Supreme Court unanimously agreed to consider whether a constitutional amendment banning commercial greyhound racing in the state after December 31, 2020 should be placed on the November 6 general election ballot. Since ballots will start being mailed out in September, justices scheduled arguments for August 29 and set a series of deadlines for filing briefs before that.

The measure, Amendment 13, is one of eight proposed constitutional amendments the Florida Constitution Revision Commission approved this spring to be placed on the November ballot. However, the Florida Greyhound Association, which represents breeders, owners and trainers, filed a lawsuit arguing Amendment 13 should not be on the ballot because it would be misleading to voters. Leon County Circuit Judge Karen Gievers agreed with the greyhound association. The state appealed and a 3-judge panel of the 1st District Court of Appeal agreed to “certify” the case to the Supreme Court, meaning it will bypass the appellate court.

In their decision, the appeals court judges wrote it was proper to certify the case to the Supreme Court, in part, because “the issues presented are of great public importance, arising from a proposal of the Florida Constitution Revision Commission to amend the state Constitution and because a need for immediate resolution exists due to time constraints related to the pending election and ballot preparation timelines.”

Arguments before the Supreme Court will focus on the wording of the proposed ballot title and summary, which are supposed to accurately reflect the meaning of the amendment. Gievers had ruled the proposed ballot title and summary were “trickeration” and “clearly and conclusively defective,” therefore the amendment should not go on the ballot. Among other things, Gievers said the title and summary didn’t make clear to voters that other gambling at racetracks, such as card games and slots, would continue if the measure passed. In addition, she noted the measure would not actually ban wagering on dog races because bets still would be allowed on races broadcast from outside the state.

In a document filed last month in circuit court, attorneys for the state disputed arguments that the phrase “ends dog racing” in the ballot title would mislead voters. They wrote, “Plaintiffs’ isolated focus on a phrase excerpted from the ballot title wrongly ignores the rest of the ballot language and wrongly assumes an ignorant electorate.’’