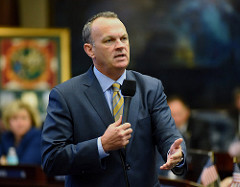 The Florida House and Senate committees have passed legislation that appeared diametrically opposed regarding the future of gambling in the state. The House bill represents an attempt to stop recent gambling expansion and make sure the legislature controls gambling going forward.

The Senate measure would allow a huge expansion of slot machines and tribal gaming. Both bills will proceed to the legislative floor for consideration in the session that starts March 7.

The House Tourism & Gaming Control Subcommittee passed House Bill PCB TGC 17-02 by a vote of 10-5. State Rep. Michael LaRosa said it “reaffirms our commitment to a limited gaming footprint. It also keeps the legislature in charge” of the future of gaming.

House Speaker Richard Corcoran added, “ I can assure you the face of gaming is a massive contraction and those people who have abused the system, abused the power of the special interests to get things in law that should never have been in law, will suffer the consequences.’’

Under the House bill, the state would approve the 20-year gaming compact that gives the Seminole Tribe exclusive rights to operate slot machines outside of Miami-Dade and Broward counties plus blackjack at their South Florida casinos in exchange for $3 billion paid to the state over seven years. But unlike a deal negotiated by Governor Rick Scott and the Seminole tribe in late 2015, in which the tribe guaranteed to pay the same amount, the House proposal would not allow the tribe to operate craps and roulette. Lawmakers did not approve the 2015 deal.

The House measure also would prohibit racetracks from adding slot machines in the eight counties where voters have authorized the games: Brevard, Duval, Gadsden, Lee, Hamilton, Palm Beach, St. Lucie and Washington. The Florida Supreme Court is expected to rule soon on a case about whether parimutuels in counties where voters have approved slot machines can expand their operations without the legislature’s approval. Lobbyist Nick Iarossi, representing dog racetracks in Brevard and Duval counties, said, “This is the stand-off at the OK Corral.”

The bill also would reverse court rulings that have allowed parimutuels to operate the popular designated-player games.

The most controversial element of the House bill is a provision that would ban decoupling, which would allow racetracks like Magic City and Mardi Gras to discontinue racing but still operate card games and slot machines. Under the provision, dog and horse racetracks could lose their licenses if they do not race at the levels required in 1998, when dog and horse racing hit peak popularity.

The House legislation also would dedicate one-third of the estimated $400 million annual Seminole-compact proceeds to charter schools, advancing Corcoran’s goal to expand them. Another one-third of the proceeds would go to teacher bonuses, recruitment and training and the remainder would go improving higher education, a priority of Senate President Joe Negron.

The House measure does not address fantasy sports.

Those opposed to the House bill said the racing provision was a corporate mandate designed to use government policy to protect a failing industry. State Rep. Jared Moskowitz said, “This is not free market. The winner is the Seminoles, large business, while losers are everybody else in the industry. It’s a die-on-the-sword moment for me. This bill is not worth the paper it’s written on. It’s not serious and yet we are wasting taxpayer money. I don’t care if my bills get killed or my appropriations get wiped out.” LaRosa responded, “Gambling is actually illegal, unless it’s authorized, so to try to take a free-market approach doesn’t exactly equate.”

In contrast, while the House bill protects the Seminole Tribe and the horse and dog racing industry, the Senate bill protects the parimutuel industry. It would give Miami-Dade and Broward counties each an additional slot casino, the Seminole Tribe would have seven full-scale casinos and horse and dog tracks in the eight counties where voters approved slots would be able to offer them. The bill, SB 8, sponsored by Senator Bill Galvano, earlier passed the Regulated Industries Committee in a unanimous vote and more recently was approved 14-2 by the Senate Appropriations Committee.

The Senate measure also would make it possible for Malaysian-based Genting to build its long-desired casino resort in Miami. It would allow decoupling and the addition of card games at local parimutuels. The bill also would legalize daily fantasy sports and require DFS operators to obtain a state permit.

Regarding the Seminole compact, the Senate bill removes the tribe’s monopoly over blackjack but allows the tribe to offer craps and roulette at its casinos in exchange for $3 billion over seven years.

Galvano, who will become Senate president in late 2018, said, “It’s positive to see two bills, one in each chamber, moving this early in the process, in other words before session has even begun. So with these two bills out there, we all know what the playing field looks like, and there’s time to negotiate further with the Seminoles and between the chambers. Now it’s time to get it reeled in.”

Lobbyist Brian Ballard, representing the Palm Beach Kennel Club, said, “I’m optimistic something can get done, but it’s the hardest subject matter in all of Florida politics. It’s the first time in years you have both the House and Senate with a vehicle that at least we can sit down and try to resolve this stuff that needs to be resolved.”