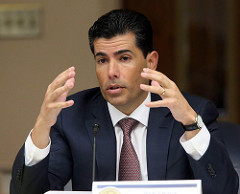 After weeks of closed-door negotiations, Florida lawmakers trying to finalize a gambling bill announced they could not come to an agreement. Therefore, no special session will be held and voters will determine the fate of expanded gambling in the November election.

Incoming Senate President Bill Galvano and incoming House Speaker Jose Oliva tried unsuccessfully to find a way to allow slot machines in some counties while reducing gambling outlets statewide. Negotiators also faced the uncertainty of Amendment 3, the Voter Control of Gambling amendment, which requires voters statewide, not the legislature, to decide whether to expand gambling in the future. Oliva said there were “too many components to resolve in a short time frame,” but added lawmakers, “will revisit them during the regular session.” Senate President Joe Negron added “significant progress” had been made, but negotiators on a deal to offer slot machines in some counties while attempting to reduce gambling outlets statewide; they failed to reach an agreement.

Galvano and Oliva considered a special session after the March 30 deadline passed, guaranteeing the Seminole Tribe of Florida would continue to make monthly revenue sharing payments to the state, even though the state violated the gaming compact by authorizing new card games resembling blackjack, which the tribe has exclusive rights to offer in Florida. But since the tribe announced it signed an agreement with Governor Rick Scott to continue making the $19.5 million monthly payments until May 2019, “that resulted in a diminution of urgency,” Senate President Joe Negron said.

Galvano and Oliva continued to negotiate over an amendment the Constitution Revision Commission placed on the ballot, requiring dog racetracks to phase out greyhound racing by 2020. Lawmakers are concerned that if this amendment and Amendment 3 both pass, voters will have to approve allowing racetracks to offer slots and poker rooms.

Also, voters in eight counties approved allowing slots there. But if legislators authorize the games, they will violate the gaming compact that gives the Seminole Tribe the exclusive right to offer slot machines on its seven reservations and blackjack at its Hard Rock casinos.

Other proposals discussed by the House and Senate included a plan to allow the tribe to lower its payments to the state by about $160 million a year. To make up the lost revenue, lawmakers proposed allowing the lucrative designated player card games, such as Three-Card poker and Ultimate Texas Hold ’em, at parimutuels and taxing the proceed. Thanks to designated player games, Melbourne Greyhound Park and the Jacksonville Kennel Club, for example, have been able to hire dozens of new employees. However, a federal court declared the games violate the compact because they play like banked card games. The tribe threatened to withhold payments to the state if regulators don’t stop the games by May 2019.

Another consideration had been Oliva’s proposal requiring parimutuels that add slot machines to obtain a gaming license from an existing brick and mortar operation, including card rooms. John Sowinski, director of No Casinos, the group behind Amendment 3, said the amendment may be retroactively applied to any expansion and therefore could invalidate any attempt by the legislature to authorize slot machines in a special session.

“There are so many opinions about what the effect of the amendment would be. It was difficult to get a certain legal determination on that issue that we could depend on,” Negron said.