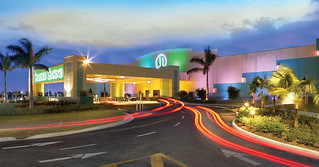 A Florida appeals court ruled Calder Race Course (l.) in Miami-Dade County can drop horseracing and offer jai alai, while keeping its lucrative slots operation. The ruling upholds the Division of Pari-Mutuel Racing's decision, which was opposed by Florida horseracing breeders. Calder has operated racing since 1971 and began operating slots in 2010.

A three-judge panel of the 1st District Court of Appeal in Florida recently unanimously ruled Calder Race Course in Miami-Dade County can discontinue horseracing and offer jai alai games—and keep its slot machines, too. The court’s opinion upheld a decision by the state Division of Pari-Mutuel Racing, part of the Department of Business and Professional Regulation, and rejected the claims of the Florida Thoroughbred Breeders’ and Owners’ Association and Ocala Breeders’ Sales Company challenging the division’s response.

In their opinion, the judges wrote, “Contrary to the appellants’ arguments, nothing requires a facility to continue the same form of parimutuel wagering activity that originally qualified it for a slot machine license; nor does this statute tie an ‘eligible facility’ to the same type of racing or gaming as it had when the constitutional amendment was approved.”

A 2004 constitutional amendment allowed parimutuel facilities in Miami-Dade and Broward counties to operate slot machines. Calder, which has operated racing since 1971, was licensed to offer slot machines in 2010. Churchill Downs Inc. acquired the track, then known as Calder Race Course, 20 years ago.

Last year Calder asked the Division of Pari-Mutuel Wagering whether it could continue to operate slots if it changed from offering horseracing to jai alai. It received a state license to offer parimutuel betting on jai alai in February 2018 and opened a jai alai fronton four months ago.

The FTBOA and Ocala Breeders may appeal the decision to the Florida Supreme Court. Pat Cummings, executive director of the Thoroughbred Idea Foundation, tweeted, “Florida continuing to make decisions positive for horse racing. Not. My friends, we need to WAKE UP.” In a subsequent tweet, Cummings wrote, “Pennsylvania–beware. The more sustainable racing can be on its own, the better. 90% of prize money from slots is not it.”