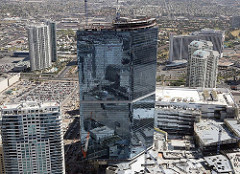 Steve Witkoff, chairman and CEO of Witkoff, as the partnership is called, described the 68-story, 3,889-room resort, mothballed since 2009, when its Miami-based developers went belly up in the global financial crisis, as “one of the best physical assets in the country.”

He said his group plans to “unlock” its potential by finishing it as a hotel with no condos planned.

A name change may be in the offing as well, according to news reports.

The Fontainebleau was about 70 percent of the way toward its $2.9 billion completion when Icahn NV Gaming Acquisition won approval in 2010 to buy the dormant site out of bankruptcy for $150 million.

Icahn, a legend among so-called “vulture” investors for his ability to snatch up distressed assets and flip them for big profits, has been actively trying to sell the Fontainebleau for more than two years, touting it as one of his company’s “hidden gems.”

He and his backers will realize around $450 million on the sale, a return of roughly 33 percent on their investment.

“We acquired a well-designed, structurally sound integrated resort at a significant discount to both replacement cost and the implied public market valuations of comparable Las Vegas Strip resorts,” Witkoff said.

And, he added, one in “a growing market with no new construction”.

But if the struggles encountered by the nearby SLS Las Vegas are any indication, Witkoff’s success may largely depend on its ability to overcome the relatively isolated 27 acres the Fontainebleau occupies at the far north end of the Strip, a graveyard of resort projects that went bust in the Great Recession and several blocks distant from the main Strip action to the south.

“Properties that are closer to MGM properties and Caesars properties tend to do better on average daily rates,” said Alex Bumazhny, an industry analyst with Fitch Ratings. “Fontainebleau is a little bit outside of critical mass. SLS struggled to ramp up to profitability, arguably because of its location.”

He added that its success also will depend on how long the new owners can sustain losses until it becomes profitable.

“They probably want to open sooner rather than later to catch the current wave of the good economy,” he said.