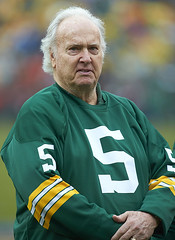 Belterra Casino Resort near Vevay opened its sportsbook a few days later, with former Cincinnati Bengals quarterback Ken Anderson placing a $100 bet on the Bengals over the San Francisco 49ers.

Horseshoe Casino in Elizabeth invited former Green Bay Packers star Paul Hornung, 83, to place the ceremonial first wager. The 1956 Heisman Trophy winner and Pro Football Hall of Famer was the first overall pick in the 1957 NFL Draft and won four NFL championships with the Packers as the team’s halfback and kicker. Ironically, Hornung also was suspended for the 1963 season by then-NFL Commissioner Pete Rozelle for gambling, after he and the late Alex Karras, then an all-pro defensive lineman with the Detroit Lions, were caught making $500 bets on NFL games with illegal bookmakers. Neither player bet on games involving their own teams, and both apologized. Still, they were suspended by then-NFL Commissioner Pete Rozelle for the 1963 season.

Caesars Entertainment Regional President Dan Nita said Horseshoe Hammond’s sportsbook, called the Book, was busy throughout the first full weekend of legal sports betting. “One person said September 5th felt like New Year’s Eve in here. There were long lines to place bets, already starting at 8 a.m. The seating area was at capacity,” Nita said. He noted bets ranged from the $5 minimum to tens of thousands of dollars.

At Hollywood Casino Lawrenceburg in southeast Indiana, sports betting began on September 1. Regarding the first full weekend of sports betting following that, Sportsbook Manager Hugh Aufill said, “It was a fantastic weekend. It was constantly busy and there was quite the level of energy Saturday and Sunday. All the tables and chairs were full. It was very, very successful and what I was hoping for, with constant business and constant lines.”

Aufill added, “The biggest advertiser I have is word of mouth. Based on the conversations I had, I think sports betting will grow throughout the year. Customers couldn’t wait to get their hands on the betting sheets for next week. This is just the start of the mountain we’re climbing.”

Prior to the launch of sports betting, for August 2019 the five northwest Indiana casinos posted a 1.1 percent increase, or $77.7 million, over August 2018, according to the Indiana Gaming Commission. Blue Chip Casino in Michigan City, Horseshoe Hammond and Majestic Star I Casino in Gary all posted slight increases, while Ameristar Casino in East Chicago and Majestic Star II in Gary saw slight decreases in revenue.