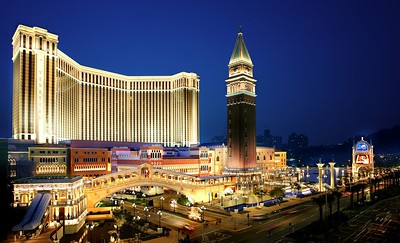 Most of the Chinese territory’s casinos have resumed operations on a reduced scale in line with the dearth of players from virus-ravaged China. Gaming revenue in Macau is expected to fall 80 percent to 90 percent through March without much improvement until regular travel from the mainland is allowed.

Most of Macau’s casinos were back in business last week, but it’s anything but business as usual.

With individual and group travel from mainland China still on hold in the wake of the coronavirus epidemic, effectively severing the territory from its gambling lifeblood, analysts are resigned to pretty much a worst-case scenario for February and March.

This view was summed up last week in a note to investors by Vitaly Umansky, Eunice Lee and Kelsey Zhu of brokerage Sanford Bernstein, forecasting a 90 percent decline in gaming revenue in February and an 80 percent decline in March, “assuming no significant improvement in travel.”

“IVS and group visas into Macau are suspended, and most transport is severely disrupted with most airlines cancelling or limiting flights into Macau and surrounding airports,” they said. “The operators we have spoken with do not see any clarity on timing of recovery at this time.”

The market also is feeling the pinch of a month-long halt in ferry service from Hong Kong and from a variety of travel restrictions enforced by several countries, while visitors from countries deemed high-risk are being subjected to health screenings before they can enter the city.

With overall visitation down an estimated 90 percent, hotel occupancy citywide has fallen below 12 percent, according to Macau Business. At some locations, average daily room rates have plunged to MOP690 (US$85), a 10-year low, said Maria Helena de Senna Fernandes, director of the Macao Government Tourism Office.

By the end of last week, 33 of the market’s 39 active casinos had resumed operations following a 15-day government closure imposed early in February, a precaution against the spread of the SARS-like respiratory disease.

The virus known as novel Covid-19 is known to have infected more than 83,000 people in more than 50 countries since it was first identified in December in the mainland China city of Wuhan. The death toll exceeded 2,800 as of late last week, most of them by far in China, which has reported more than 78,000 cases, although the spread of the virus there appears to be slowing.

Macau’s casinos are operating in scaled-back mode to reflect the reduction in demand. They’re also under government orders not to seat players next to each other, to space their active tables and machine games at safe distances apart, and to require staff and guests to wear face masks. Regular cleaning and disinfecting of gaming areas also has been mandated.

These rules have been broken at a handful of properties, according to the Gaming Inspection and Coordination Bureau, the government’s casino regulator, but the violations have been rectified, the agency said, and regular inspections are being conducted to ensure compliance.

It’s expected also the contagion might also push back several new resort openings and expansions, in large part because of a shortage of construction workers, many of whom come from in and around the neighboring mainland city of Zhuhai and are subject to 14-day quarantines by the Macau government.

In a client note cited by GGRAsia, JP Morgan Securities said, “Including the broader impact from Covid-19 on logistics, etc., we see a possibility that the opening of new properties”𑁋SJM Holdings’ Grand Lisboa Palace, Galaxy Entertainment’s Phase III and Sands China’s Londoner Macao𑁋”may be pushed out by a couple of months versus prior schedules.”

Lawrence Ho, chairman and chief executive of Melco Resorts and Entertainment, said on the company’s fourth-quarter and full-year earnings call that he expects a “significant slowdown” in the pipeline of workers for Phase II of Melco’s Studio City casino hotel.

Studio City President Geoff Anders added that it’s “still too soon” to say how this might impact construction.