For Sale: One Unlucky Dragon 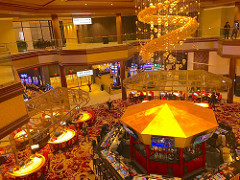 An auction of Las Vegas’ struggling Lucky Dragon casino hotel has been postponed to February 22.

The Chinese-themed resort on Sahara Avenue just west of Las Vegas Boulevard is being sold in foreclosure to satisfy the $48.9 million balance on a $90 million loan developer Andrew Fonfa obtained in the spring of 2016 while the Lucky Dragon was still under construction.

According to the Las Vegas Review-Journal, little is known about the loan or its purpose. It was issued by a company called Snow Covered Capital, an entity linked to San Francisco real estate investor Enrique Landa of Associate Capital. It was not mentioned in a press release sent out at the time which described the boutique property as “fully financed”. A default notice on the loan was issued in September 2017, according to the same news report.

As the city’s first ground-up gaming resort since the recession, Lucky Dragon was loudly heralded at its debut, but the property struggled from the outset to woo the big-spending Asian players it was designed to attract. Some observers blame the off-Strip location for part of its troubles, saying the area is not favored with much pedestrian foot traffic and that the property itself is difficult to access by car.

In any event, management began curtailing operations and laying off staff within months of opening. The 27,500-square-foot casino and surviving food and beverage locales were fully closed on January 4. The nine-story hotel is still operating.

The auction, originally slated for February 6, will be held at the Nevada Legal News building on Fourth Street near Charleston Boulevard.