HomeGambling RoundupFor the New Caesars, Only Two States to Go

For the New Caesars, Only Two States to Go 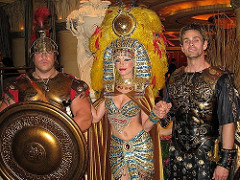 Nevada regulators have given their nod to Caesars’ reorganization plan, leaving only Missouri and Louisiana to issue the approvals that will allow the casino giant’s largest operating company to exit federal bankruptcy protection in early October.

Caesars representatives are set to meet officials from the Louisiana Gaming Control Board and the Missouri Gaming Commission later this month.

Caesars Entertainment Operating Co., the largest subsidiary of Las Vegas-based Caesars Entertainment, filed for Chapter 11 protection in January 2015 with some $18 billion of debt. The restructuring plan hammered out over two years of contentious negotiations with creditors will wipe away around $10 billion of those obligations under a complex arrangement that places creditors in majority control of two new entities formed through a merger of CEOC with parent Caesars: a real estate investment trust that will own nearly all their combined U.S. gaming assets and an operating company that will lease the properties from the REIT and run them.

The plan was approved by a U.S. Bankruptcy Court judge in January and endorsed by shareholders in two separate votes in July.

In addition to Nevada, approvals have been granted by gaming authorities in Illinois, Indiana, Iowa, Maryland, Mississippi, New Jersey and Pennsylvania.

Caesars and its subsidiaries own or operate 47 casinos in the U.S. and internationally.