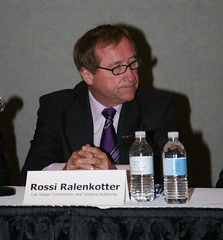 The arrest late last month of a former high-ranking official of the Las Vegas Convention and Visitors Authority has injected fresh heat into the question of whether former Chief Executive Rossi Ralenkotter knew that airline gift cards he and other LVCVA staffers had used for personal travel were purchased with public funds.

The Las Vegas Review-Journal reported that Las Vegas Metropolitan Police arrested Brig Lawson on March 27, charging the authority’s former director of business partnerships with felony theft in connection with his purchase and use of $90,000 worth of Southwest Airlines gift cards between 2012 and 2017. He was released the next day on $10,000 bond, the newspaper said.

Ralenkotter, credited with steering the LVCVA during one of its most prolific eras of growth, retired last August it was revealed he’d used $17,000 of the gift cards for personal travel for himself, his wife and members of his family.

The purchases were uncovered by an outside audit launched in 2017 after a series of investigative reports by the Review-Journal into spending on travel, entertainment and transportation at the authority and its oversight of expensive gifts in its care.

The audit, which prompted Las Vegas police to get involved, showed the gift card purchases had been hidden in promotional events with Southwest paid for with authority money, which is largely tax-funded.

Ralenkotter has said he was not aware the cards had been purchased with public funds until he talked with LVCVA executives in 2017. To date, investigations by both the LVCVA and the police have uncovered no evidence tying him to the purchase of the cards. He later repaid the $17,000.

“I was totally transparent with that whole thing from the beginning,” he told the Review-Journal last week.

Of the $90,000, authority staff determined that $20,000 was used for legitimate travel and $20,000 was used by staff and a board member for personal travel, including the $17,000 spent by Ralenkotter. About $50,000 is missing, and its whereabouts remain under investigation.