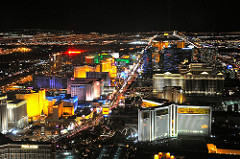 Four of the largest gaming companies in Nevada are undergoing often traumatic transitions, according to CDC Gaming Reports. Some are dealing with financial uncertainty and two are dealing with the losses of the visionaries who founded them in the late 1980s. They include MGM Resorts International, Caesars Entertainment, Las Vegas Sands and Wynn Resorts.

Between them the four companies account for 23 of the Las Vegas Strip’s most iconic properties, which own nearly two-thirds of available hotel rooms.

Steve Wynn, founder and CEO of the company that bears his name, was forced out about a year ago when the Wall Street Journal published an expose of a long list sexual harassment accusations against him. He not only resigned as CEO and president; he also sold all his company holdings.

Under a new CEO the company, which operates the Wynn Las Vegas and Encore has made a very public effort to remake itself and its corporate structure. It has added four women to its nine-seat board of directors, added new board chairman Phil Satre and its new CEO Matt Maddox has led a very public cleaning of the Augean Stables.

It has added aggressive new sexual harassment policies and last month agreed to pay the Nevada Gaming Control Board a $20 million fine to settle the complaint that former executives failed to deal with charges against Steve Wynn for years.

But its biggest challenge may be whatever decision the Massachusetts Gaming Commission makes regarding those same issues and whether the company should keep its license to operate a $2.5 billion casino near Boston—which is set to open in June.

Just as traumatic is the absence of Sheldon Adelson, founder of Las Vegas Sands, and who has been away from its day to day operations since December. The company has kept under wraps his treatment for lymphoma, but revealed his condition recently.

According to the company, Adelson, 85, is still performing his duties as chairman and chief executive officer but has handed over operations of the Venetian and the Palazzo to President Rob Goldstein and CFO Patrick Dumont, who is Adelson’s son-in-law.

Analysts point out that Adelson’s illness hasn’t kept it from being run in a prudent manner. As one analyst told the Nevada Independent that the company “remains in incredibly good hands.”

Up until recently Adelson, one of the 20 richest men in the world, has personally driven the company’s investment in properties in Macau and Singapore, from which the company takes two thirds of its annual revenues. The company is also lobby New York to allow casino development near the Big Apple itself.

MGM , which has 10 properties on the Strip, has put itself on a strict “diet”; announcing that it will cut payroll by $100 million over two years while buying out some of its most enduring executives, including CFO Dan D’Arrigo, and Scott Sibella, president of the MGM Grand Las Vegas. It hopes to improve cash flow by $300 million at the end of two years.

Its cost cutting regimen came as a result of pressure from investors who were unhappy that the stock’s price had last 25 percent of its value over the last year.

Caesars is dealing with a new minority owner, the 83-year-old Carl Icahn, who recently purchased 18 percent of the company through $1.023 billion in stock acquisitions, giving him three seats on the board of directors. He is pressing for the company to be sold or merged with another company. Eldorado Resorts has been mentioned as a possible suitor. Such a merger could create a company with more than 50 gaming properties in 18 states.

Because Icahn effectively controls the company, he is being required to be licensed by Nevada gaming regulators.

These corporate earthquakes are happening as the Independent reports that visitors are balking at rising costs to stay at a hotel in Las Vegas, including charging guests for parking. Guests can also hand over cash for using the spa, gym or WiFi on top of room rates.

University of Nevada at Las Vegas Associate Vice Provost for Faculty Affairs David Schwartz, who for years directed the school’s Center for Gaming Research, says the industry is facing challenges associated with being a mature industry, rather than a growing one.

He told the Independent: “It may be that new leadership, or at least new ideas, is necessary to face these challenges. To me, the MGM and Caesars issues seem more like symptoms than causes.” He added, “The structure of the industry doesn’t seem to be changing, as much as the faces around the table.”

Longtime Nevada Gaming Commission Chairman Tony Alamo Jr. says the companies’ issues should be viewed independently, rather than something affecting the industry. It is nowhere as serious as what affected the industry during the Great Recession, which Alamo witnessed since he has been on the commission since 2008. During that period Strip casino revenues plummeted around ten percent for two years running.

During that period the commission reviewed various reorganizations and a full bankruptcies. Today nothing like that is taking place, he says.

Before the period the greatest change came in the late 1960s when gaming began to be taken over by mainstream finance. That’s also when the first of the “mega resorts” began to open, says Schwartz.

According to SunTrust Bank gaming analyst Barry Jones, many of the issues facing the four companies signal a “changing of the guard at the top” that is typical of an industry that has been undergoing basic change for most of a decade.

He notes that MGM and Caesars grew to prominence through building casinos and consolidation. The importance of regional gaming markets fueled the real estate investment trust (REIT) industry beginning six years ago, which separated the owners of casino properties from those who manage them. So that, for example, MGM owns the controlling interest in MGM Growth Properties.