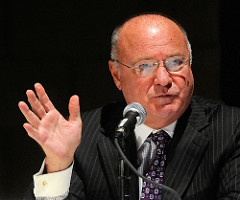 Massachusetts Gaming Commission Chairman Stephan Crosby May 23 joined regulators from Louisiana, Michigan and Nevada in making what was for Crosby the first public utterance on sports betting since the May 14 Supreme Court ruling that tossed the issue into the air.

“As experienced gaming regulators who are part of the U.S. State Gaming Regulators Forum, we would encourage jurisdictions to establish and implement regulatory models that are not only adaptive and successful, but that remain flexible enough to be sturdy, yet encourage innovation,” said the joint statement.

A few days later Crosby clarified that he had not actually taken a position on whether sports betting should be legalized. He attributed this to the ambiguous nature of the joint statement.

Although Governor Charlie Baker had also expressed interest in taking up the issue, House Speaker Robert DeLeo made clear that won’t be happening in the 2018 legislative session, which ends in July.

The governor told Bloomberg, “It’s hard for me to see how we could ignore this and choose not to pursue it.” But if the Speaker doesn’t agree, the pursuit will end up in limbo.

DeLeo declared, “There are so many questions that have to be answered, and I think that right now for us to be able to expect to do this within the last two months of session… I think it would be very difficult.” He added that everywhere he goes he encounters many different opinions on sports betting. They are concerned about integrity of the games, keeping money in the Bay State, protecting minors and online gaming, he said.

“I think we have to do it as best we can and try to get it right the first time, and if that takes a little bit longer for us to get to that point to do it correctly, I think that’s the way we ought to do it,” said the Speaker.

“These aren’t very easy questions that you can just expect to resolve in a short period of time and say, ‘OK, let’s just do it this way and see how it works and them come back later,’” he added. “I think we have to listen to all sides pro and con and come up with a piece of legislation that I think we can all be proud of.”

Whenever the House does address sports betting, Rep. Joseph Wagner, chairman of the Joint Committee on Economic Development and Emerging Technologies, would lead the review. He would be the “natural person to lead the charge,” said DeLeo, noting that Wagner helped write the 2011 law that expanded gaming in the Bay State.

Wagner told reporters, “There are a lot of layers to this thing. We’re just in the beginning stages of looking at it with the court now having made the decision.” He added, “It’s more important to get it right than to do it quickly. Only time will tell if states who have already taken action will in fact have gotten it right … and there just hasn’t been time to assess that.”

Wagner’s co-chairman, Senator Eric Lesser, said the approach should be done “expeditiously” but thoughtfully. He said delaying the decision until 2018 would put the MGM Springfield, which opens in three months, into a “holding pattern.”

Noting that he recently watched a hockey game in the company of someone who placed a wager on the outcome of a face-off during the game, Wagner commented, “If you look at betting today, there’s a lot to it.”

Speaker DeLeo added, “With the many issues that we’re dealing with right now for us to be dealing with a hypothetical and not knowing what’s going to happen, as Joe had mentioned, we need to probably get some further answers from the federal government as well. Are they going to step in? Are they going to mandate something on the states? So, not at all,” he said.

Massachusetts is known for its passionate sports fans and some of the most successful teams. The state is also the home base to DraftKings, the largest daily fantasy sports company, one that has already expressed a strong interest in offering sports wagering.

The gaming commission has been studying the issue ever since the Supreme Court said it would be considering the ban this year. A white paper commissioned by the commission estimated that the state could see tax revenue of between $.8.6 million and $61.3 million. This is based on three possible tax rates of 6.75 percent, 10 percent and 15 percent and three models for availability and ease of sports betting, from limited to convenient. These rates were borrowed from a 2017 national study by the American Gaming Association, which had supported legalization.

The joint statement by the four very different states urged all the states to work together and for federal law enforcement to continue to crack down on illegal gambling. Information on real-time betting should be shared between jurisdictions to prevent game fixing. It urged responsible measures, reasonable taxation rates and warned that heavy fees could kill the nascent industry.

“Sports betting in Nevada has already been regulated with integrity and success, and gaming jurisdictions across the United States, including tribal jurisdictions, have demonstrated their ability to oversee gaming of all sorts while adhering to the highest standards,” said the statement.

• Smart taxation to encourage growth of the industry. Nevada, one of the four states represented, has a 6.75 percent tax rate that relies on volume to generate income;

• Share data, including real-time betting information, that will help discourage cheating and game fixing. The American Gaming Association has been pushing to set up a national sports betting data repository; and

It calls for “coordinated action among jurisdictions” to fight illegal betting and corruption of the sports.

The joint statement clearly advises against cooperating with the push from several national leagues, including the NBA, PGA Tour and Major League Baseball for an “integrity fee.”

The pushback against the national leagues appears to cross many state lines. One of the legal team that challenged the sports ban at the Supreme Court, former New Jersey state Senator Raymond J. Lesniak, remarked, “We have been very clear: We’re not going to pay one dime of tribute to the leagues.”

States are also pushing back at the notion, expressed by Football Commissioner Roger Goodell last week, that Congress should regulate sports betting and set national standards. James Kilsby, managing director of Gambling Compliance, an independent research organization, told the New York Times, “All forms of gaming have historically been regulated at the state level. I think you’re going to see the gaming industry be extremely reluctant to bend on that issue.”

Major League Baseball reacted to the statement by Crosby et al, saying it was disappointed that they had made the statement “without even soliciting the views of other stakeholders, such as sports leagues, governing bodies, and universities.”

It called criticism of the “integrity fee,” “casino propaganda.” It said that it might be forced to seek “federal regulation of sports betting.”

A lot of money is involved, certainly. According to Sara Slane, senior vice president for public affairs at the American Gaming Association, Americans illegally bet $150 billion annually. In Nevada, she said, the handle is $4.5 billion.

If Massachusetts legalizes sports betting, it will need to consider whether it should be allowed online or using mobile apps. Would the state lottery offer it? What tax rates would be set? How would minors be protected?

When and if sports betting is offered, the Plainridge casino, MGM Springfield and Encore Boston Harbor, would be ready to offer it. All the parent companies—Penn National, MGM Resorts and Wynn Resorts—have previous experience offering it in Nevada.

“We look forward to working with legislators and policy makers to achieve a regulatory outcome that benefits states and consumers alike while ensuring the integrity of sports,” MGM said in a statement after the High Court’s decision was announced.

Penn National, which operates the state’s one currently operating casino, the Plainridge Park slots parlor, has said that sports betting could be “another amenity,” for patrons.