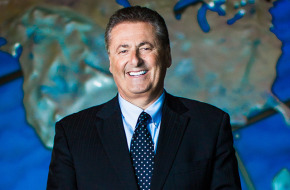 A fixture of Las Vegas gaming for four decades, Foxwoods CEO Felix Rappaport died unexpectedly over the weekend in his Connecticut suite at Foxwoods. He was 65.

His body was discovered in the suite at Foxwoods where he lived part of the time. He also had a home in Las Vegas.

No cause of death has been determined, although no foul play is expected in the death of Rappaport, whose career spanned MGM Resorts International, where he was executive at eight properties, culminating in becoming Foxwoods’ chief executive officer in 2014, in charge of one of the world’s largest casino and resort properties.

He began his career in the hospitality industry at the Sands Casino Hotel in Atlantic City in 1980. Before entering the gaming industry in 1991, Rappaport had worked as a hotel manager in Philadelphia of the Radisson Suite Hotel and with Hershey Entertainment and Resort Co. The sheer scale in the change of venue was remarkable: in Philadelphia he ran hotels that had 500 rooms. At the Mirage, at that time the largest hotel-casino on the Strip, he ran a hotel with 3,000 rooms.

In a 2011 interview with the Las Vegas Review-Journal, Rappaport recalled, “I remember vividly thinking to myself, ‘How the heck do we provide a high level of service for 3,000 rooms?’”

Fortunately, he found a way: “It’s through good organization and good preparation. Whatever number we set as a forecast in the hotel division, happily, we usually exceeded it and blew by it.”

In Las Vegas he was employed at Station Casinos and was president and chief executive officer of the Mirage and Treasure Island as well as a top executive at New York-New York, the Luxor, MGM Grand and the Excalibur casinos.

In the 2011 interview he talked about his first experience operating not just a hotel but an entire casino property, the Boulder Station. “I learned about slot and table games management, casino marketing, advertising, compliance, casino-cage management and financial issues. It was a great training ground,” he said.

In 2014 Rappaport had been senior vice president and chief operating officer when he was appointed to succeed Scott Butera, who left to become commissioner of the Arena Football League.

At Foxwoods, Rappaport had employed a strategy of diversification by adding many non-gaming attractions and amenities to the resort to make it more competitive in an era of increasing competitiveness in the industry, a trend that has been felt particularly at the Indian casinos of Connecticut.

A recent example was the development of Foxwoods Extreme Adventures, which includes the HighFlyer zipline. He also brought high profile celebrity chefs, such as Guy Fieri’s Foxwoods Kitchen + Bar and Sugar Factory to the property.

He also brought the PLAY Arena @ Foxwoods to the property. This innovative technology allows players to enjoy a variety of games from a single station.

Rodney Butler, chairman of the Mashantucket Pequot Tribal Nation, issued this statement, “On behalf of the entire tribal council, Foxwoods’ management team and staff, we extend our deepest sympathies to Felix’s family.”

He added, “With his passing, we have suffered a major loss. Felix’s passion for modernizing and growing Foxwoods, as well as his friendship, mentorship and humor, touched everyone who worked with him. We are confident that Felix’s legacy will live on as we continue to push forward on the vision he set.”

The tribal council in a statement said it would “consider how to best resume Rappaport’s strategic plan for growth in the days ahead with a continued focus on the property’s long-term vision.”

“We are saddened by the news of the passing of our former colleague and friend, Felix Rappaport,” said MGM Chairman and CEO Jim Murren said in a statement. “Felix was a member of the MGM Resorts family for more than two decades and is remembered fondly by many. Our condolences and prayers go out to his family at this difficult time.”

American Gaming Association President and CEO Geoff Freeman made this comment on Rappaport’s passing: “Felix made profound contributions to the gaming industry over decades of service to several casino operators. In recent years, Felix led Foxwoods Resort Casino and was a driving force behind their active engagement in the AGA. We could always count on Felix to be publicly supportive, privately constructive and dedicated to the best interests of the gaming industry. We will miss his humor, companionship and unique ability to find the positive.”