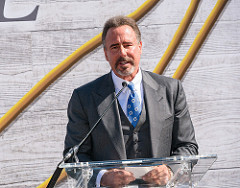 Mark Frissora, hired five years ago to bring Caesars Entertainment out of bankruptcy, will leave the company in February when his contract expires. The contract had a renewal clause that would have tacked on one year annually if neither Frissora or Caesars took action. But the decision to allow Frissora to leave has several possible implications.

Shareholders, and some of their “activist” brethren, have been uneasy with a lack of movement in the stock price since the company emerged from bankruptcy, although Caesars has bought two racinos in Indiana and announced several non-gaming efforts, including a luxury hotel in Dubai.

Frissora’s departure is viewed by some analysts as a sacrifice to investors who wanted change. The company will now employ a recognized search firm to find Frissora’s replacement. The share priced jumped almost 10 percent when the announcement was made after the market closed.

One possible successor could be Anthony Sanfilippo, the departing CEO of Pinnacle Entertainment, which was just acquired by Penn National Gaming. Sanfilippo is a former Caesars (when it was Harrah’s) executive who is very familiar with the industry. His work at Pinnacle would undoubtedly qualify him for the job.