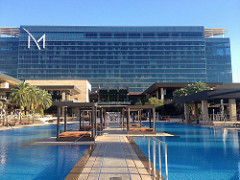 The FTC’s go-ahead clears one of the last obstacles for the deal to be completed. In a statement, the agency approved the deal pending Boyd Gaming Corporation’s acquisition of three Pinnacle-operated casinos in Cincinnati, St. Louis and Kansas City. Boyd agreed, when the Penn-Pinnacle deal originally was announced late last year, to acquire the operations of Pinnacle’s two Ameristar casinos in Missouri and Belterra operations in Indiana and Ohio for $575 million. Boyd will sign a lease agreement with real estate investment trust Gaming and Leisure Properties, the landlord for the Pinnacle-owned resorts.

Including Pinnacle’s 12 remaining casinos, Penn National will become the largest regional gaming operator in the U.S., with 41 properties in 20 jurisdictions.

The merger is expected to close by mid-October.