Future Florida Gambling Could Be Up To Voters 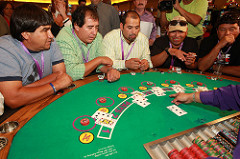 Negotiations between Florida House and Senate lawmakers over a gambling bill fell apart on the last day of the session, March 9. That could have been state legislators’ last chance to have input on gambling issues, because if 60 percent of voters approve a proposed constitutional amendment in November, voters will have to approve any future gambling laws. That means voters would determine the legality of fantasy sports, pre-reveal games, greyhound racing and the expansion of slot machines.

The failed legislation would have renewed the state’s compact with the Seminole Tribe of Florida, which pays the state $300 million a year for the exclusive right to offer blackjack and other games. Barry Richard, who represents the tribe, said the Seminoles had hoped lawmakers would preserve the tribe’s exclusivity in any gaming deal.

“Beyond that, I think it’s just a matter of whether or not the legislature proposes a deal that makes sense to the tribe. They would be able to make the same deal with the tribe that they could have made before, except they can’t expand gaming outside of the tribal lands,” Richard said.

The current Seminole Compact extends to 2030. The proposed voter amendment, if it passes, would not affect any future deal with the tribe.