HomeThe ShuffleGame of the Week: Bonanza by Big Time Gaming

Game of the Week: Bonanza by Big Time Gaming 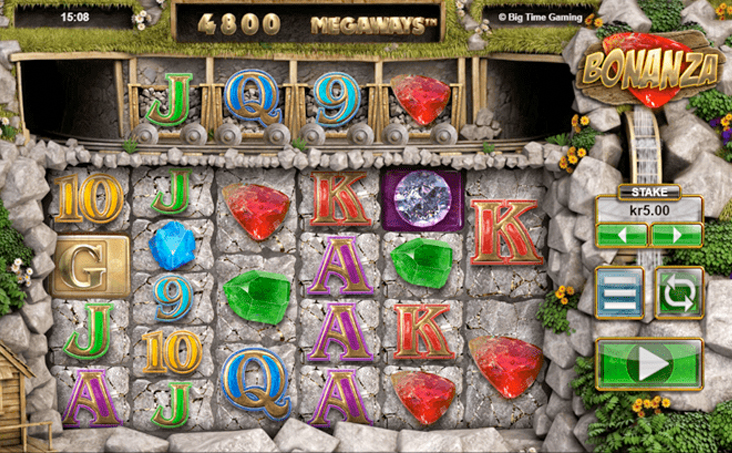 GoldenNugget.com can now access games on the Big Time Gaming’s OGS system—one of the most popular online gaming networks in the world. Here’s why that matters, and how to get started.

In other words, Golden Nugget’s online casino will be able to access games on the Big Time Gaming’s OGS system—one of the most popular online gaming networks in the world.

OK, we sense you need a little more information.

Basically, the deal allows Golden Nugget to offer Scientific Games and Big Time’s Megaways slot games. What’s Megaways? Well, it’s an alternative to offering simple paylines that can give you quite literally thousands of ways to win on every spin.

The easiest way to explain Megaways is to highlight Bonanza, the first BTG slot on GoldenNugget.com.

Bonanza is a 6-reel slot with Gold Rush theme. The scene boasts waterfalls and miners’ huts. The symbols are set on blocks of granite that spin through the reels. However, those blocks of granites have different sizes, which means anywhere between two and seven symbols can appear on any given reel.

There’s also an extra set of four symbols that appear above the 7 rows in so-called mining cart spots. They contribute to the game symbols lining up left to right, meaning some reels actually have 8 rows of symbols.

Those variables mean the ways you can win will change with every spin. If each reel has 7 symbols after a spin, there are an incredible 117,649 ways to win—though realistically, you’ll get several thousand possibilities on most spins as it’s tough to get a full 7 symbols on each reel.

Dyno-mite!
The fun part is, if you hit a payout, the granite blocks explode and new symbols fall into place (sort of like a Candy Crush effect). It’s called the “Win Reaction” and gives you another shot at payouts on the same spin. Win Reaction can even set off a cascade effect that really racks up some nice payouts. The feature includes a multiplier that goes up one with every successive win.

In fact, when Megaways and Win reaction are going strong, the game can actually line up more wins than you can keep up with, which is pretty exciting when you think about it.

Sign up today at GoldenNugget.com and claim a $1,000 Instant First Deposit Match Bonus!

We should also mention that Bonanza features a free spins mode, which is set off by the letters G. O. L. D. They are the game’s scatter symbols. Land 4 of the symbols and you’ll get 12 free spins with the potential for more.

Bonanza is the most basic of the Megaways games, but it’s a great way to see the value of this feature. It’s action-packed. There’s always something exploding, or giving out free spins. The game has a medium to high volatility.

Some other great Megaways games to look out for are Extra Chili—set on a chili food wagon, no less—and Who Wants to be a Millionaire. Game play is similar to Bonanza, but you can expect Golden Nugget Online to roll out these versions soon.

Then the question will be, what theme do you like in you Megaways slot?