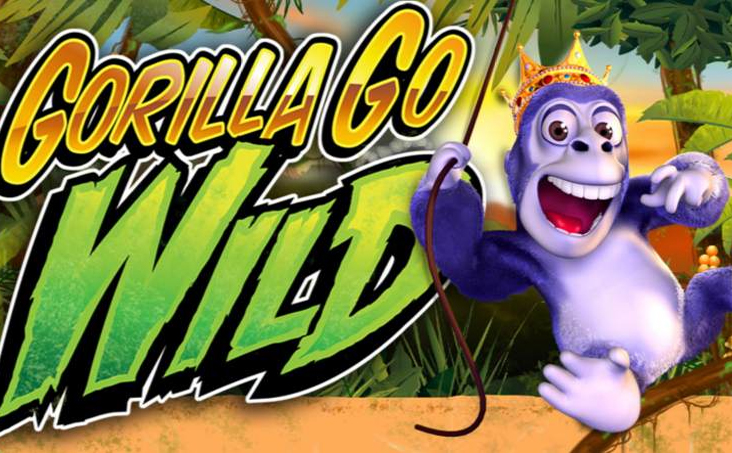 Gorilla Go Wild from NextGen shows just how much fun a goofy slot theme can be. Animated Gary Gorilla literally sits on the edge of the screen watching your spins—and munching bananas.

Gorilla Go Wild from NextGen Gaming proves just how entertaining a themed slot game can be. In this one, all eyes are on an animated Gary Gorilla, who literally sits on the edge of the screen watching your spins, handing out bonuses and unlocking special features.

He also eats bananas, which actually increases your level of play as he goes.

First released in 2014, Gorilla Go Wild is a five-reel game with 25 paylines.

The jungle theme is marked by symbols that include animals and letters. The two to look out for are Gary himself—he’s the game’s wild symbol—and the Ancient Temple, the game’s scatter symbol that sets off special features. Hit three of the temples and Gary will even give you a thumbs-up.

Going Bananas
One of the fun things about the game is that you progress as you play. As Gary eats bananas, he increases your level—which actually increases the game’s rate of return—and unlocks bonus features. Gary can also randomly unlock these features and give out random bonuses, which he does by dipping into a pot of gold.

If Gary finishes all the bananas—look for them in the top left corner of your screen—he moves to a new location, changing the look of the game and increasing how often he hands out random bonuses.

Gorilla Go Wild has a great theme and cool bonuses. It’s an easy fit with mobile devices. If you’re looking for some laughs—and oh yeah, some jackpots!—spend a little time in Gary’s Kingdom.

Get acquainted with Gary Gorilla at BorgataCasino.com. But first, check out the game here:

Great Tiger
This Chinese-themed game from Everi games does it right with roaring tiger symbols and forest creature symbols sprinkled throughout.

Right off the bat, you’ll notice the games layout of 6 reels, each 4 symbols high. Instead of paylines, winning combinations are made by any 3 or more of the same symbol landing, anywhere on adjacent reels reading left to right. According to Everi, that means you’ve got 4,096 ways to win.

One of the most important symbols in Great Tiger is the Golden Coin, which sets off the game’s free spins round while the Firecracker—which explodes—is the wild symbol.

Get a tiger by the tail! Play Great Tiger today at ResortsCasino.com.

Kronos Unleashed
Kronos Unleashed, a Greek mythology-themed game from WMS, might catch you off guard at first, then hook you in with some pretty intense graphics. The game is actually a sequel to the original Kronos slot from WMS.

The game play is different, with the reels taking up a small part of the themed screen set on Mount Othrys, home of the Greek Titans. The Titan Kronos watches over your every spin and the game also sports an epic sound scheme.

Kronos Unleashed is a 5-reel slot with 60 paylines. But the reels are 8 symbols deep and the game spins stacked symbols. That can lead to some nice hits if the stacks line-up with the wild symbol: an Ancient Temple.

The free-spins bonus is very cool and is set off if Kronos symbols stack up in line on reel 1. You’ll be treated to a great show with Kronos sending down lightning bolts as the spins play out. The game’s scatter symbol can also set off a free spins round.

There are a lot of mythology-themed slots. Kronos Unleashed is a fine addition to the list.