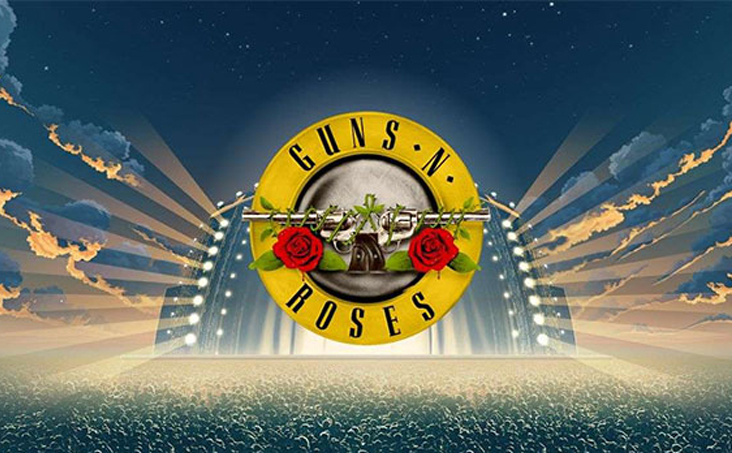 This may sound strange, but there’s more than one reason to play an online slot game.

Yes, the most obvious reason is to hit some big jackpots—no argument.

But in today’s online casinos, you can also find a host of games that are themed on pop culture, both current and nostalgic.

Games are based on TV shows, movies, celebs and even board games like Monopoly. These games can feature some really cool graphics and sound effects that bring their theme to life.

And, if you were a headbanger back in the 1980s and early ’90s, one of the best themed games is the Guns N’ Roses slot from NetEnt.

Based on the legendary rockers, the game was rolled out with great fanfare in New Jersey in 2017 to honor the band’s 30th anniversary.

Easier than Air Guitar!
Though the game isn’t progressive and doesn’t offer a huge jackpot, it’s an easy play with five reels, three rows and 20 paylines. A number of bonus options give out free spins. The game’s “Crowd Pleaser” bonus wheel hits often, allowing you to play a scratch game to reel in some extra cash.

The reason for the game’s popularity, however, comes from its game play and graphics. It’s just an ’80s rock blast.

First off, you can pick one of five “soundtracks” that’ll play GNR songs such as Welcome to the Jungle or Paradise City all through your session. The game is also infused with a lot of classic video of the group. Trust me, if you love GNR, you’ll never hit the “skip intro” button.

The graphics continue during the game play. Line up certain symbols—such as three Slash symbols, for example—and the group members literally pop out of the screen.

And if you trigger the “Crowd Pleaser” bonus wheel, you’ll get a spin of what resembles an old vinyl turntable that either awards credits or puts you into the scratcher game.

The key to this game is rock energy and a steady payout of small hits. The game boasts a 96.98 return to players, according to NetEnt.

Of course, if you’re not a fan of Guns N’ Roses, the game loses its appeal. And if it’s a jackpot you’re after, GNR may not pack the punch you’re looking for.

But if you are a fan, this game rocks.

Click here to play now at: BorgataCasino.com, GoldenNugget.com and Caesars.com.

Get In the Horse Rac