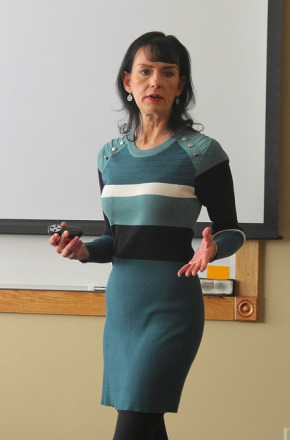 When Susan Hensel was a little girl her father would rush over to her and say “You are going to be on the TV someday,” and then he would lift her up, carry her over to their console television and set her on the top of it. Hensel’s father was apparently somewhat prophetic for following Hensel’s graduation from the University of Wisconsin she went into the broadcast news business for television station WISN TV, the ABC affiliate in Milwaukee, Wisconsin; she later moved to Central Pennsylvania where she was an on-air TV personality with WHP TV, the CBS affiliate in Harrisburg, Pennsylvania, the state’s capital.

During her stint at WHP TV Hensel decided that she wanted something with more upward mobility than being an on-air TV personality and she took a job as a deputy press secretary for the state of Pennsylvania, being quickly promoted to executive assistant to the head of the Department of Labor and Industry. To further satisfy her goal for advancement, she enrolled in Widener University Commonwealth Law School, located in the state’s capital. She kept her day job with the state and attended law school at night, and recalls that sleep during this period of her life was a true luxury. Four years after starting law school Hensel received her Juris Doctorate and passed the Pennsylvania Bar. She then moved into the office of Inspector General as an attorney and press secretary for the state of Pennsylvania.

In July 2004, the state of Pennsylvania passed its Gambling Act and by then Hensel was serving as an assistant general counsel in the Governor’s Office. She was then appointed special assistant of the Department of Revenue and became the first person in the state to work on gaming implementation before the creation of the Pennsylvania Gaming Control Board. Several months later she became the first employee of the nascent PGCB. That agency now numbers just under 300 employees, and Hensel serves as its director of licensing.

Many also know Hensel for her involvement in the International Association of Gaming Regulators where she served two terms as president and now serves as a trustee. Never one to sit still, Hensel has also published a number of articles on gaming and is often sought out to speak on gaming and its regulation at conferences and events around the world.

In 2017, Hensel decided she wanted to give something back to her law school, so she returned to Widener to see if she could teach a gaming law class. The school was most receptive and so she set out preparing for the task, and one of the first calls she made was to Anthony Cabot, of counsel, Lewis Roca Rothgerber & Christie. Hensel reports that Tony was most helpful and that he shared a great deal of advice on developing her syllabus and lectures. For her textbook, she used The Law of Gambling and Regulated Gaming, authored by Anthony Cabot and Keith Miller.

She was also able to secure the services of a number of guest lecturers including Dave Rebuck, director of the New Jersey Department of Gaming Enforcement; Lloyd Levenson, an experienced private sector gaming attorney with Cooper Levenson; Elizabeth Lanza director of the Office of Compulsive and Problem Gambling and Paul Mauro, director of the Bureau of Investigations and Enforcement, both from the PGCB; and Richard Schuetz, recently having stepped down as the executive director of the Bermuda Casino gaming Commission and a former gaming executive.

Hensel found that the class was a great deal more work than she had ever dreamed, but also that is was a great deal of fun. She especially liked the interaction with the law students, for as she states: “You can think you know a topic, but to stand before a group of law students and explain it, and then get questions, well, that is challenging. Teaching a class forces a person to think more deeply about issues, and it forces a person to really learn.”

The state of Pennsylvania is now going through one of the most significant expansions in the history of gaming in the U.S., and Hensel is looking forward to being involved and tapping into her broad network of contacts around the world as the state launches new gaming products. She is also hoping to continue working with Widener, for as Hensel says: “With the substantial expansion in gaming in Pennsylvania I want to help ensure that the state has a group of well-trained lawyers with a fluency in gaming. Widener game me the opportunity to learn the law and contribute to the state. I want to stay involved and help return that favor.”