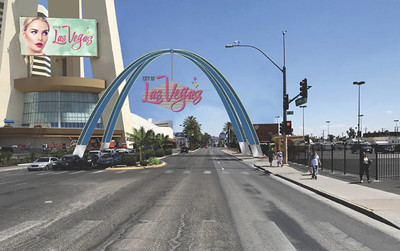 The lights debuted November 18 at the northern end of Las Vegas Boulevard between St. Louis and Bob Stupak avenues at the base of the Strat Hotel, Casino & SkyPod, according to the Los Angeles Times.

By day, the arches are deep blue; by night, they light up in various colors. Each leg of the arch spans 140 feet, and the emblem measures 20 by 40 feet, according to a news release. Construction took eight months at a cost of $6.5 million. It was designed by Selbert Perkins Design and created by the century-old sign company Yesco.

The new landmark took shape after a truck mangled a Welcome to Fabulous Downtown Las Vegas sign four years ago. The arches were seen as a grander permanent replacement to welcome people to the less-visited downtown area.

This isn’t the first attempt to bring a glitzy gateway downtown. Two years ago, the city installed signs featuring 26-foot-tall showgirls and the city’s name as well as betting chips and big dice. It stands at Main Street and Las Vegas Boulevard, not far from the Strat and the new arches.