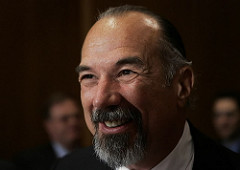 Gettysburg businessman David LeVan, who has twice failed in his attempt to bring a casino to Adams County near the historic Gettysburg battlefield, is making a third attempt.

LeVan is applying for the last Pennsylvania Category 1 racetrack casino license for a harness track and casino in Freedom Township, to be called Mason-Dixon Downs. The proposed site is around three and a half miles from the Gettysburg National Park and its famous Civil War battlefield.

LeVan is aiming for the license that is available because of repeated failures by successive operators to gain financing for a racino in Lawrence County, in western Pennsylvania. One of the failed projects there was owned by Connecticut’s Mashantucket Pequot tribe, owner of Foxwoods Resort Casino.

LeVan tried first for a Gettysburg-area casino in 2005, and again in 2010. Both times, his proposals split residents of Adams County between those wanting a piece of the Pennsylvania revenue pie and preservationists who want to protect the hallowed ground of the Gettysburg battlefield and preserve the rural nature of the surrounding Adams County.

LeVan has signed a purchase agreement for around 700 acres in Freedom Township, contingent on his securing a harness racing license and the last Category 1 casino license. The property borders the Maryland state line just off Interstate 15.

More than 70 people crowded into a Freedom Township Board of Supervisors meeting last week for LeVan’s presentation of project details. Those attending revealed that local citizens are still divided over the prospect of gaming—attendees wore buttons both supporting and opposing the project. In February, a petition to block the project garnered 1,200 signatures.