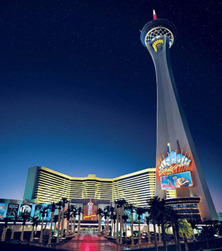 Golden Entertainment is bidding to become a major player in the lucrative Las Vegas locals market by acquiring American Casino & Entertainment, owner of the Stratosphere and the Arizona Charlie’s casino franchise.

Armed with $1.1 billion in financial commitments from a consortium of major banks, Golden has agreed to pay $850 million for the three casinos, plus the Aquarius Casino Resort in Laughlin―$781 million of it in cash, the balance in the form of 4 million shares of Golden stock (Nasdaq: GDEN) at a price of $17.05 a share.

The price represents an 8 times EBITDA multiple pre-synergies and 6.8 times post-synergies, based on American’s estimated 2017 earnings, while presenting Golden with an opportunity to double its annual revenues and triple its EBITDA.

Golden’s board has approved the acquisition, as has Whitehall Street Real Estate Partners, a private equity fund managed by Goldman Sachs that owns AC&E and will own 15 percent of Golden when the deal closes.

“We’re seeing a continued consolidation across all regional gaming,” said Union Gaming analyst John DeCree. “That’s just driven by the efficiencies of scale and synergies it produces. The more properties you can own and greater scales you have, the better and more efficient it is.”

In Golden’s case the acquisition dramatically increases its position in Southern Nevada, where it currently owns three casinos―all in Pahrump, about 60 miles west of Las Vegas―and the Rocky Gap Resort in western Maryland.

Formed in 2015 through a merger of Las Vegas-based Golden Gaming and Lyle Berman’s Lakes Entertainment, Golden is best known as Nevada’s largest slot route operator, controlling more than 10,000 machine games in more than 900 locations in the state and in Montana. The company also is Nevada’s largest gaming tavern operator, with more than 50 locations, most of them in the Las Vegas Valley.

With AC&E in the portfolio Golden will own eight casinos, nearly 16,000 gaming devices, 114 table games and more than 5,100 hotel rooms. It will support roughly 7,200 jobs and generate estimated net revenues of $850 million and adjusted EBITDA of $180 million for 2017.

CEO Blake Sartini termed the acquisition “a transformational event” for the company.

“In my opinion, these assets are based in the strongest, most stable regional gaming market in the country―Southern Nevada,” he told analysts on a conference call to announce the deal. “Nevada has the most stable tax and regulatory environment anywhere. Nevada, and Las Vegas in particular, is one of fastest-growing regions in regards to population and job growth.”

“The American properties represent an ideal complement to our existing operations as they strengthen our presence in the Las Vegas locals market while providing us with an iconic destination property on the Las Vegas Strip,” he continued. “Our proven strategy of focusing on guest service, quality food and beverage offerings and effective player marketing will complement the strong existing operations currently at all of American’s properties. In addition, given the recent investment activity focused on the north end of the Las Vegas Strip, we see future potential to develop the approximately 15 acres of excess real estate surrounding the Stratosphere. This acquisition supports our goals for growth in many ways, including the potential to use our increased free cash flow and financial scale to pursue distributed gaming opportunities in existing or potential new markets.”

The Stratosphere is expected to play a key role in the enlarged company, with its iconic 1,149-foot observation tower and thrill rides serving as a magnet for younger tourists and gamblers. The property also brings with it 15 acres of undeveloped land well situated on Las Vegas Boulevard just above Sahara Avenue.

Golden says it sees its enhanced Las Vegas positioning as a springboard for larger ambitions.

“Consolidation in gaming, broadly, has been happening over the past 10-15 years in a bigger sort of way in the regional and Las Vegas Strip side,” said Alex Bumazhny, a gaming industry analyst and senior director for Fitch Ratings. “And in the last years, we’re seeing it more rapidly on the locals side as well.”

For Berman, who remains a board member of Golden, buying the Stratosphere is the second time around for him. In 1993, his company Grand Casinos bought a one-third interest in the project initiated by then-Vegas World owner Bob Stupak in 1990. A fire in 1993 delayed the opening, but the tallest tower in the United States finally debuted in 1996. Just after opening, the Stratosphere Corp. declared bankruptcy and Carl Icahn came in to take it over and formed American Casino and Entertainment.

In December, Boyd Gaming purchased Aliante Station and earlier in the fall bought the Eastside Cannery on Boulder Highway and the Cannery casino in North Las Vegas.

Also last fall, Station Casinos completed its purchase of the Palms, which at times has appealed to locals and tourists alike, on Flamingo Road just west of the Las Vegas Strip.

Last month, SLS on the Strip, while not strictly a locals casino, announced it would be purchased by Alex Meruelo and Meruelo Group, owners of the Grand Sierra Resort in Reno.