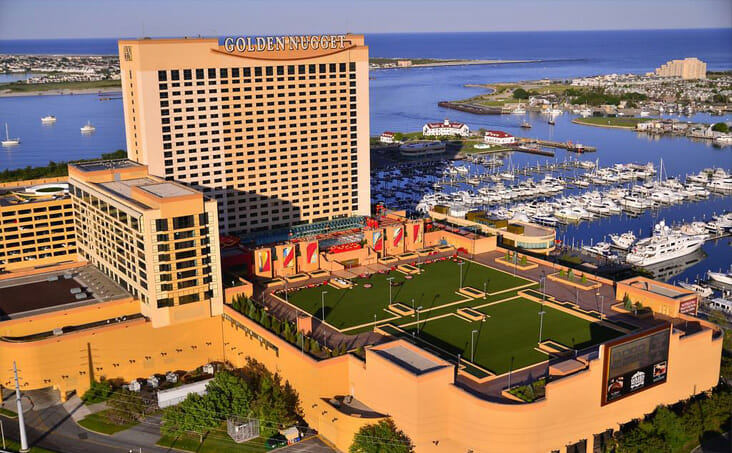 Golden Nugget Atlantic City (l.), the leader in the New Jersey online gambling market, could see its combined online revenue surpass its brick and mortar revenue by the end of 2019. That would be a first for a U.S. casino. Through May, the casino has made only $3.5 million more with its brick and mortar casinos than online. However, the casino’s total online revenue is shared with three other online platforms.

While really only a technicality, Golden Nugget Atlantic City could be the first U.S. casino to realize more revenue through online play than through its brick-and-mortar casino.

Through May, the difference between earnings generated from Golden Nugget’s online gaming portfolio and the brick-and-mortar property has been less than $3.5 million according to an analysis by the Press of Atlantic City.

In March, Golden Nugget and its online gaming partners—betfaircasino.com, playsugarhouse.com and nj.betamerica.com — set a record for internet gaming in New Jersey with $14.23 million in reported revenue, which was $3.4 million less than what the casino brought in from tables and slots, according to the Press.

The next month, the groups saw $13.85 million in revenue with the difference between online and casino revenue less than $1.6 million.

Of course, Golden Nugget AC splits its online revenues with its partners while keeping all of its brick-and-mortar revenue. Still, casino officials say the figures show the casino’s focus on online gambling.

Thomas Winter, senior vice president and general manager of online gaming for Golden Nugget, told the Press, that by focusing solely on the New Jersey market over the past five years, the casino and its online partners have an advantage over competitors whose attention is sometimes spread across multiple jurisdictions.

“As a trend, the growth is mostly online,” Winter said. “The good news is that it’s not really cannibalizing land-based revenue.”

Sports betting has also had a major impact on online gambling, with about 80 percent of sports bets in the state placed online.

“Sports bettors were not seeing themselves as casino players,” Winter told the paper. “But most of the online gaming growth is coming from sports betting players who sign up to bet on sports and then will start playing a bit of roulette, blackjack or slots. We believed the market was always there, but you had to offer a better product and user experience and educate people about online gaming. I believe this growth will continue.”

Has New App Solved i