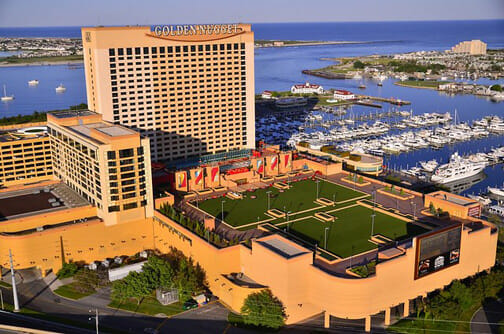 Regulators have approved a request from the Golden Nugget Atlantic City (l.) to break from its land-based casino owner and go public as an iGaming affiliate of the casino.

The move was approved at a special meeting of the commission the day before Thanksgiving, requested by Golden Nugget casino owner Tilman Fertitta. Federal regulators must still sign off on the deal.

The license granted to GNOC makes the entity an internet gaming affiliate of Golden Nugget casino. The entity itself will merge with publicly traded Landcadia Holdings II Inc., a “blank check” acquisition company established by Fertitta that currently trades under the symbol LCA. After the merger, the new public company would trade under the symbol GNOC.

“You need to have adequate access to capital to be able to grow and compete effectively in this nascent and very quickly growing industry,” Liem said, according to the Press of Atlantic City.

A representative of the state Division of Gaming Enforcement, Dylan Thompson, expressed concerns at the hearing that the deal could hurt Golden Nugget Atlantic City, which has benefited greatly from the iGaming revenue boost.

“The transaction would deprive (the casino) of the much-needed cash flow from internet gaming on a permanent basis,” Thompson said.

Because of this CCC Chairman James Plousis recommended conditions be added to the merger agreement to protect the land-based casino’s revenues.

“While there may continue to be variations in Golden Nugget’s online gaming versus land-based gaming revenue, particularly as the industry as a whole works to recover from the impact of Covid-19, I am satisfied with the petitioners’ assurances that they are committed to Golden Nugget Atlantic City’s ongoing financial stability,” Plousis said, according to the Press. “I am convinced that Mr. Fertitta will protect Golden Nugget’s brand of excellence and elegance, and will do so by supporting, maintaining and ultimately growing the Atlantic City casino hotel facility.”

In related news, Golden Nugget Online Gaming entered into a definitive agreement with Danville Development on November 19 to provide online sports wagering and iGaming in Illinois when it becomes legal.

In addition to the online component, GNOG will provide a mezzanine loan in the amount of $30 million to Danville Development for development of the casino. The 20-year agreement required GNOG to pay Danville Development a percentage of its online net gaming revenue, subject to minimum royalty payments over the term.

“The Golden Nugget is a nationally recognized brand and strengthens the submission, provides additional opportunities, and upgrades the overall project,” said James A. Wilmot, vice president of Wilmot.

This marks the Golden Nugget’s first joint venture on a casino project, Fertitta said. “We are honored to be the one selected amongst numerous bidders for this opportunity by the Wilmot family after a highly competitive process.”

Golden Nugget Online Gaming also struck a deal November 23 with Greenbrier Hotel Corporation in West Virginia for the right to offer mobile sports and online casino wagering under the Greenbrier’s licenses, again subject to regulatory approvals. As with Danville, GNOG will pay the Greenbrier a percentage of its online net gaming revenue, subject to minimum royalty payments over the term.

“The partnership with the Greenbrier is an important milestone for Golden Nugget Online Gaming expansion plans,” Fertitta said.

Greenbrier President Dr. Jill Justice said Golden Nugget has proven itself as a market leader in the industry. “We’re confident it will deliver a product that matches the standard that defines ‘America’s Resort,’” Justice said.